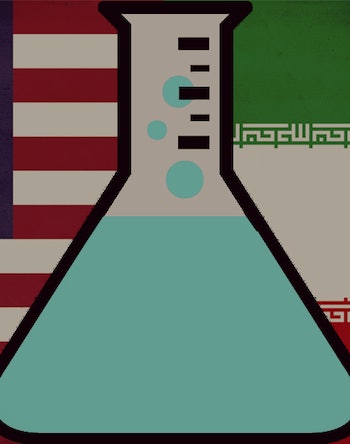 Dr. Sadjad Riahi always knew he would leave Iran. His parents, both scientists and both part of the panicked “brain drain” that sucked scholars out of Tehran after the Iranian Revolution, moved to Japan to pursue graduate degrees when he was only three years old. They stayed there for seven years. Science was important to Riahi’s family, but lack of resources made pursuing research an uphill battle.

That was true in 1979, and it was still true in September 2016, when Riahi moved to America after completing his medical degree at the Tehran University of Medical Sciences. Today, Riahi can be found most days in New York University’s Bobst Library, studying for the United States Medical Licensing Examination. He wants to be a medical researcher in America.

Riahi is outstanding in some ways and not in others. He is gracious and earnest, especially about his research on multiple sclerosis. He is also one of thousands of Iranian students, medical professionals, and researchers that go West to build a life for themselves every year. The lack of domestic support for the sciences, combined with a top-notch public education system, creates a well-educated, highly motivated tribe of Iranian STEM specialists who settle in the United States. That system has worked, more or less, for over 30 years.

But then President Donald Trump signed an executive order dubbed the “Muslim Ban” on January 27, potentially halting American “brain gain” and making it unclear what will happen to both current and future Iranian scientists. For perhaps the fourth time in modern history — brain drains followed both World Wars and the Cold War — there now exists an essentially stateless group of economically valuable, highly trained, and socially adaptable scientists.

Of the roughly 8,700 students Iran sends to the United States each year, 75 percent specialize in STEM fields, and 82 percent pursue graduate degrees. For people like Riahi, moving to America to pursue science wasn’t an abstract dream — it was the plan. They constitute a class of extremely well-educated scholars that understand, at a young age, that elite scientists do not — with a few minor, but notable exceptions — work in Iran.

Riahi evaded becoming part of the ban’s stranded Iranian scholars. But for him, the ban represents uncertainty, even as a green card holder. But for several Masters students at the University of Tehran enrolled in an exchange program with Indiana University, it represents a dead end. Sara Kurtz Allaei, the executive director of that school’s Office of International Affairs, tells Inverse that the students in Iran are anxious. “They’re asking, ‘Oh no, am I going to be able to come?’” she says. “That’s completely understandable.” She’d helped start the program — known as “2+2” to signify the number of years students would spend in either school — in 2007 and built it up to welcome 45 new Iranian students a year. She regrets not being able to “provide concrete predictions or speculate” about their situations because she is hopeful the 90-day ban will not last any longer. For students in Tehran, she can only offer encouragement and tell them to proceed with their applications “so we can get things lined up from the student visa perspective.” She is aware that paperwork doesn’t offer them much comfort, but she doesnt want to build up their hopes again. They’ve already been let down once.

Students that come to Iran represent every part of the scientific spectrum: Allaei’s first group, in 2007, consisted largely of engineering students, 45 percent of them women; others, like Riahi, are medical students; still others are scientists pursuing research fields still in their infancy, like evolutionary computational biology, or exometeorology.

If they can’t find placements in America, Iranian students have two choices: Stay in Iran or find somewhere else to go. The situation at home is not exactly grim, but doesn’t offer much space for ambitious scientists to go big. Though top-notch college-level scientific training is provided free of charge by the national government to those who pass the grueling, competitive admissions tests, basic scientific resources are hard to access. This is why there is a lack of journal-worthy research that exists in dialogue with members of the international scientific community coming out of Iran.

When new research does come out of Tehran, scientists from other parts of the world are often suspicious. This is not because of Islamophobia or bias against Iranians; it’s because there is a sector-wide awareness that Iran has outdated equipment in poorly financed laboratories and a meddlesome government.

When Riahi submitted a paper to a top neuroimaging journal in 2012, he says he received a rejection letter that made the problem explicitly clear. The review board said that they doubted “that you could do these tests with MRI in Tehran.” Riahi believes that response politely conflated two issues: diminished resources and reports of plagiarism from Iranian scientists. Though he finally did get his work published in The Clinical Neuropsychologist and NeuroImage: Clinical, he did so only after collaborating with American and French scientists.

“Sometimes, when we submit a paper to a journal, they might ask for confirmation that our research team is not affiliated or supported by the Government of Iran,” Riahi adds.

By moving to America, Iranian scientists hope to leave discrimination behind. To them, the United States offers not only opportunity but also the promise of fair and equal treatment in the academic community. Trump’s Muslim ban, however, eliminates that possibility, and these scientists are faced with a stark choice: Move elsewhere or return home.

Moving back to Iran could have its upsides, however. Sam Sinai, who moved to the U.S. to complete his bachelors at MIT and is completing his Ph.D. in the Department of Organismic and Evolutionary Biology at Harvard, is quick to acknowledge that leaving the country is “doing it a disservice.” But he says he didn’t have much choice. He studies theoretical biology; he cannot realistically expect to get support for that back home. Sinai says he has no plans to leave Cambridge, where he has built a home for himself among the international scholars along the Charles River. He feels betrayed, however, on the behalf of bright students younger than him who are stuck in political limbo and unable to follow their career plans. “The U.S. policies toward Iran are heartbreaking,” he says. “I say this in a rational sense, too. The policies are driven ideologically, not logically.”

If all else fails, Iranian scientists and scientists-in-training will likely find other destinations. Canada, Allaei says, is fairly popular, as is the United Kingdom, Germany, and Australia, countries with large Iranian populations and a strong interest in STEM research. Still, none of those options is on par with America, which can currently offer more jobs, better schools, and, as Sinai points out, a more “inclusive” society. It’s clear that American society has been kind to them over the years. According to a report published by the National Science Foundation in 2011, 89 percent of Iranian doctoral students in the U.S. expressed a desire to stay in the country after they received their degree.

But the competition in smaller countries can be fierce. Canada, for example, has only 14 English-speaking medical schools. The U.S. has 126.

The rest of the world will not miss the opportunity to court Iranian talent. Canada, for one, has already opened its borders to the scientists locked out by the ban. In an interview with New Scientist, AAAS Center for Science Diplomacy project director Marga Soler called brain drain “a real possibility,” and noted the damage the ban could have on America’s capacity to attract “the best and the brightest.” Meanwhile, the 1,700 members of the European Molecular Biology Organization have created the Science Solidarity List, a database of scientists willing to share laboratory space to U.S.-based scientists who are stranded because of the ban.

Riahi can count his wife — also a doctor — as a member of the newly formed band of scientists existing in the purgatory between the U.S. and its outcasts. She had moved to New York with him in September, but an ill-timed trip back home for her grandfather’s funeral left her stranded in Tehran, together with Allaei’s scholars and the thousands of other students who try to move to the U.S. each year. In his attempt to find solace, Riahi took a break from studying to attend a massive protest against the immigrant ban at New York University’s Washington Square Park. “I came here to get away from these things I’m seeing right now. This discrimination,” he says, quickly adding that the protests against the executive order have been encouraging. “I was really surprised. It was great.”