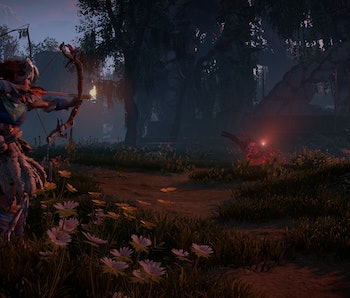 It almost goes without saying that Horizon Zero Dawn comes with plenty of great features and mechanics, but nothing comes close to the integrated photo mode which allows you to pause the game at any time and capture some of your favorite moments while exploring the game’s apocalyptic landscape. It is, quite simply, an incredible way to spend your time in the game.

If you haven’t tried out photo mode yet, simply pull up Horizon’s pause menu to access it during any point in the game. Once opened, you’ll have access to a complete set of controls which you can use to alter the camera angles, depth of field, brightness, exposure, and time of day to capture the perfect shot. After you’ve got the perfect scene, you can drop a border or logo on the photo too before sending it off to social media or your own personal collection. It’s one of the most robust cinematic tools I’ve experienced yet in a game.

During my time with the game, I’ve spent a few hours framing shots and using them to document my own journey through Horizon Zero Dawn. Here are some of the best photos I’ve taken so far.

Taken right at the beginning of Horizon Zero Dawn when Aloy accidentally falls into the forbidden Metal Ruins near her home.

Another photo from the first set of ruins where Aloy discovers her Focus as a child.

This photo has to be one of my favorites, showing off the beautiful morning when I began to train with Rost as Aloy.

A look at the Nora lands, home of Aloy and her guardian Rost from a cliff overlooking the valley.

One of my first encounters with Scrappers, Horizon Zero Dawn’s machines which recycle their malfunctioning or damaged robotic friends.

While tracking a missing brother who staged his own death, the moonlight decided to light up my path for a few moments.

Another one of my encounters with Scrappers, where I played more aggressively to take them down instead of sneaking around.

Easily the most challenging encounter during the first few hours of the game, this was when I was fighting my first Sawtooth in the middle of the night.

Once you complete the first few sections of the game, you’re allowed to leave the safety of home and step out into the wilderness where you find dozens of ruins and vehicles left behind by the world’s previous inhabitants.

Tallnecks, one of Horizon’s many machines, are gigantic data transmitters which you can climb onto and hack into to reveal portions of the map. This was my first time encountering one in-game while exploring Devil’s Thirst.

Taken from the eastern side of the map, here’s a shot of Aloy and her Strider looking at the sun setting over Devil’s Grief.

Something that reminded me of The Last of Us, this is a long-forgotten gas station is hidden away in the middle of Devil’s Grief.

My second encounter with a Sawtooth went better than my first, but mostly thanks to notching a few extra arrows on my bow. These machines are extremely dangerous unless you play it safe and keep your distance.

Jumping down on an unsuspecting cultist while working my way through what I believed to be an old baseball stadium from Horizon’s precursor civilization.

Sunrise over Devil’s Grief, one of Horizon Zero Dawn’s many ruins that scatter the landscape. Since you can hide Aloy using photo mode, landscape photos are a joy to take in-game.

More like this
Gaming
8.4.2022 7:11 PM
10 new games to grab ASAP from the PlayStation Summer Sale 2022
By Robin Bea
Gaming
8.7.2022 3:00 PM
You need to play this forgotten sci-fi classic on Nintendo Switch ASAP
By David Grossman
Gaming
21 hours ago
Super-streamer Ludwig Ahgren hates the same awful gaming trends that you do
By Steven Asarch
Related Tags
Share: