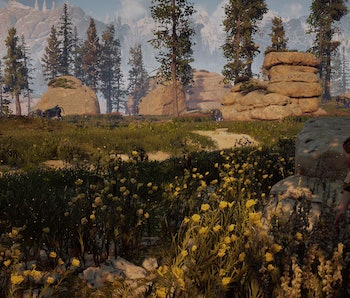 While chasing down a massive machine like the Sawtooth may sound like a fun feat to pull off in Horizon Zero Dawn, it involves a strategy which will more than likely get you killed. Playing aggressively in Horizon Zero Dawn is certainly a viable approach, but it must be supplemented by stealth if you’re looking to make the most of your available weapons and resources. Whether you’re going up against a machine or human enemy, taking the time to assess the situation and strike when they least expect it will drastically increase your odds of survival.

Though it may be tempting to slide under your next machine target and attempt to hit its weak point, practice using a few of these strategies while engaging your enemies with stealth.

When working through the tutorial section of Horizon Zero Dawn’s narrative, the game will constantly remind you that movement speed affects Aloy’s stealth capabilities. While it may not seem prevalent during the tutorial, once you enter the open world, machines will be able to detect you easily provided you aren’t moving at a snail’s pace around them.

Until you have the Quiet Sprint skill at the bottom of the Prowler skill tree, make sure to toggle crouch and move slowly to avoid detection when you’re sneaking around enemy humans or machines, especially when they have a clean line of sight on you in the open. If an enemy does happen to see you, just back off and wait for things to calm down once again.

Invest in the Prowler Tree

During your time with Horizon Zero Dawn, you’ll have the opportunity to invest dozens of skill points you earn into three different skill trees: Prowler, Brave, and Forager. While Forager and Brave have distinct advantages when it comes to collecting resources and eliminating targets in open combat, Prowler contains many skills which will significantly boost your stealth capabilities early in the game.

Invest some skill points in the Silent Strike ability and the upgrade attached to it as soon as you can, as it will give you the ability to quickly take down small machines and humans as well as deal massive amounts of damage to larger-sized machines before entering open combat. When fighting heavy and elite enemies, be sure to grab Leader Strike too, which will allow you to instantly them down without alerting any of their friends.

Before you even start to engage enemies, be sure to find a good vantage point and survey the entire area using Aloy’s Focus Mode. By activating the earpiece, you’ll be able to see every single target in the area and mark them accordingly for when you engage in open combat. Most packs of both human and machine enemies have a weak link which you can simply lure into an area where nobody is watching using rocks, and silently eliminate them with an arrow or your spear before they can report back. In many cases, you’ll be able to slowly thin out the herd, avoiding the threat of engaging every member of the pack at once.

While looking over an entire area filled with enemies, you’ll also be able to track their movement using Aloy’s Focus Mode, depending on the type of enemy you are going up against. Even if you can’t track their exact patrol path, take some time to analyze how you could use the environment against your target by looking for paths you can force them down or choke points you could use to limit their movement. Then, before you strike, use your Tripcaster to place down a few traps to exploit those specific areas in combat. Pressure your enemies into your traps to deal massive amounts of damage without firing off a shot, or use a set of shock traps to cover your retreat when you break their line of sight and retreat into the bushes. Never go into an enemy encampment without analyzing their movement and taking advantage of it, otherwise you’ll probably end up dead.