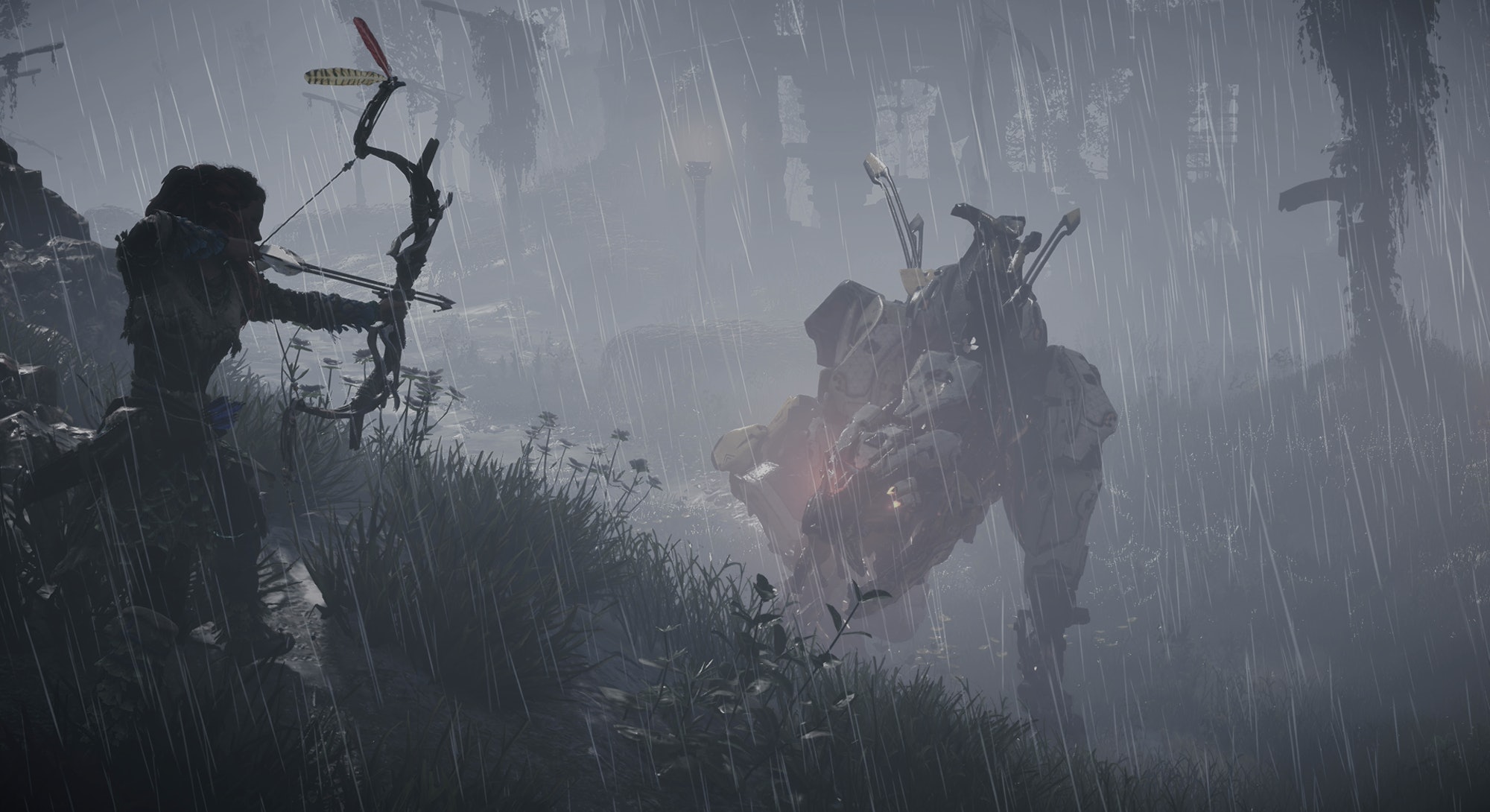 Regardless of how you approach Horizon Zero Dawn, hunting is a necessary skill to master. Almost everything you’ll build in-game, from arrows to explosives, requires parts from the various machines roaming around the wild whether it be wire to wrap around your arrowheads or blaze canisters to ignite your explosive traps. There’s going to be a lot of hunting in your future, so it’s important to do it right.

Hunting the machines that roam Horizon Zero Dawn’s post-apocalyptic world isn’t easy, but with a few rounds of practice and a little patience you’ll be taking down enemies thousands of feet taller than Aloy. Here’s a few tips and tricks to help you do exactly that.

Clear the Area Around Your Main Target

Nearly every enemy machine you’ll encounter in the wild travels in packs, made up of a few Watchers (who act as early warning sentries), a set of Scrappers (to recycle damaged parts), a few passive machines (to collect resources from the environment), and one big war unit as the ultimate protector of the entire group. In most cases, you’ll be going after the big machine for resources, but before you do, it’s important that you slowly work to eliminate every piece of support it has.

Since large machines like the Sawtooth can kill Aloy in a few hits during the first half of the game, you don’t want to contend with its smaller allies throughout the fight. Use your Focus to analyze the area the pack is occupying before slowly working through it, dealing with every small machine in sight ahead of fighting your main target.

Traps Are Your Best Friend

If there’s one thing you need to learn about hunting machines in Horizon Zero Dawn, it’s that traps should always be used in combat no matter how powerful your character’s equipment currently is. While bow-type weapons each have distinct advantages and arrow types to help you whittle down machines in combat, traps are the only way to keep them at a distance as you continuously pick away at their weak points and armored exterior.

Before you tackle the main machine of your hunting expedition, be sure to use a Tripcaster to set up a few traps along its patrol path or ones you can lure them into during combat. When set off, these will usually give you enough time to escape to a better vantage point or exploit a weak spot hidden underneath heavily-armored enemies. Combine these with a few craftable traps such as the Blast Trap or Shock Trap, and you’ll almost always be able to drain a significant portion of their health bar without shooting an arrow.

Since most enemy machines can kill you in a few quick hits, you’ll want to have a hefty supply of healing consumables every time you go into battle against a challenging enemy regardless of how confident you feel with your combat abilities. While the medicine pouch allows you to heal over time by consuming herbs, you won’t have much time to idly sit and heal yourself while fighting against machines.

For hunting, you’ll need potions to counter this, which come in two different types: Health and Resist. Health potions restore health immediately in large portions or give you a health boost, allowing you to take more damage for a short period. Resist potions on the other hand allow you to absorb additional elemental damage or cure yourself of corruption (poison) in combat. Both types are required when going up against machines, especially if they utilize a specific element to deal damage to you in combat. To craft them, however, you’ll have to hunt living prey like boars and rabbits, so don’t forget to hunt a few when you’re out farming resources.

Every machine you’ll go up against during Horizon Zero Dawn will have a distinct advantage against you: the ability to both deal and take tremendous amounts of damage over the duration of a fight. Because you’ll always be fighting with a limited amount of supplies, it’s important to realize that every encounter with an enemy machine is a war of attrition where you must best utilize the tools at your disposal to exploit their weaknesses. In dangerous encounters, it is far too easy to misfire an arrow or sling an elemental bomb slightly over an enemy’s head, so always try to plan your moves ahead of time. Place tripwires that you can use defensively when things go bad, use opportunities where machines are stunned to lock them down to the ground with a Ropecaster, and never forget to research their weaknesses ahead of time in the game’s bestiary. The sooner you become used to the fact that Horizon Zero Dawn doesn’t have a one hit wonder weapon, the better off you’ll be when it comes to surviving and hunting the machines covering its landscape.