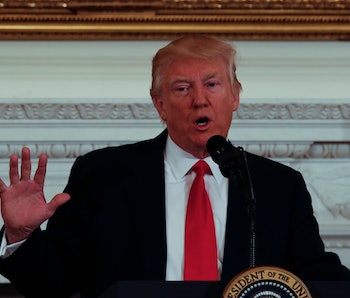 PBS NewsHour’s John Yang wrote on Twitter that Trump will “call for return of manned space exploration.” It’s entirely unclear what is meant by a “return” to human space exploration, and exactly what difference that entails from current operations being pursued by NASA, which still regularly sends astronauts to the International Space Station.

Those remarks, if true, could go a number of ways during Trump’s speech. The president may be referencing the fact that America itself has not been able to launch any astronauts into space from U.S. soil since 2011, when the Space Shuttle program was shuttered. The agency has since relied on Russian Soyuz launches to get its astronauts to the ISS even while U.S.-Russian relations have deteriorated to a new low since the Cold War.

The agency is seeking to rectify the problem with the Commercial Crew Program, which would hand over the task of ISS launches to U.S. spaceflight companies like SpaceX and Boeing. Unfortunately, the two companies have repeatedly forced delays on the program, which could put NASA in a fraught position of having to reopen negotiations with Russia’s space agency to secure more seats on future Soyuz launches for another year or so.

So Trump may be calling for the United States to speed up the process of conducting its own crewed launches once again.

Tuesday’s speech also comes a day after SpaceX’s surprise announcement that it intends to send two private citizens on a flight around the moon and back in 2018. His remarks may be a simple allusion to this mission. Given how bullish many in his administration are on the prospect of increased commercialization of space, the president might simply plan to reflect positively on SpaceX’s plan.

Another thread that these remarks might weave into may have to do with the idea of going back to the moon. Internal chatter in the administration suggests the president wishes to redirect some NASA resources toward a crewed mission to the moon. That plot thickens with NASA’s recent initiation of a feasibility study that will consider turning its uncrewed 2018 Orion mission to the moon into a crewed one.

Trump is expected to deliver his speech at 9 p.m. EST. It’ll be on every channel, probably.