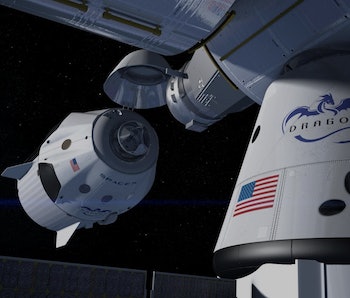 NASA confirmed on Monday that a planned commercial crew program that SpaceX and Boeing were working on has suffered delays, and won’t launch until 2018 at the earliest. This is a real problem for NASA, because without this program, the agency has to rely on Russian rocket launches to get American astronauts to the International Space Station — and it hasn’t bought enough tickets.

In a blog post, NASA revealed that SpaceX won’t have its first uncrewed test flight until November of 2017, and Boeing won’t have its until June of 2018. As recently as this summer, SpaceX was publicly eyeing next year as a realistic goal for sending human crews into space. That, apparently, won’t be the case, since NASA requires that its commercial providers “must demonstrate that their systems are ready to begin regular flights to the space station.” Neither Elon Musk’s company with its Dragon capsule nor Boeing with its CST-100 Starliner will be ready in time.

There had been speculation that SpaceX would have to delay everything after one of its rocket blew up, spectacularly, on the launchpad in September.

Assuming that all the tests work out perfectly and the companies get the okay to send people into space — and that’s a pretty big assumption — NASA won’t be able to rely on American services until late 2018. If the schedule slips anymore beyond that, well, American astronauts might be screwed.

After NASA closed down the Space Shuttle program in 2011, the agency has had to buy seats on Russian Soyuz rockets in order to get astronauts up to the ISS. Our current contract expires in on December 31, 2018, and Russia has said it has “no plans” to write up a new contract.

It’s worth remembering that Donald Trump will be president in 2018, and it’s looking like he’s not going to be a friend to NASA. There’s sadly a very real chance that there won’t be any Americans in space for a while unless NASA’s luck turns around.