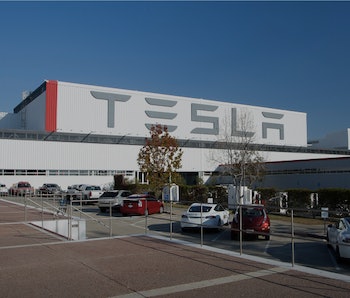 Elon Musk is stoked about the upcoming Tesla Model 3 release, but in the future, it won’t really matter. During a quarterly call with investors on Wednesday, Musk said the factory that makes his all-electric Tesla vehicles will be far more important than the cars themselves, thanks to cutting-edge increases in automation and manufacturing technology.

The Model 3 is the start of a new era at Tesla, in which the company has focused making its manufacturing process as innovative and efficient as possible. Tesla’s largest financial investment of the past few years has been its massive Gigafactory in Nevada, a sprawling, multiple-billion-dollar structure that will pump out lithium-ion batteries for Tesla vehicles at unprecedented rates. Tesla vehicles are currently assembled at the company’s factory in Fremont, but future Gigafactories in Europe and the U.S. will produce cars as well as batteries. The Model 3 is the test case for a new type of highly automated manufacturing.

“There’s a lot more automation [manufacturing the Model 3] than there is for S and X. We have the Gigafactory [making] powertrains, power electronics, charger, a few other things. That’s a huge asset,” Musk said during the earnings call. “I also refocused most of Tesla engineering into designing the factory — in the future, the factory will be a more important product than the car itself. I’ve said this before, but our goal is to be the best manufacturer on Earth. [That’s] the real goal. I don’t know if it will succeed but I think we are making good progress into its direction.”

The Model 3 is “on track” to start limited production in July, and the company says its Fremont facility should be cranking out 5,000 cars a week around September of this year. Eventually, it wants to double that number to 10,000 cars every week, which is a staggering uptick in production from the current rate, which produces about 50,000 Model S or X vehicles per year.

Still, Tesla might have to put out those numbers to keep up with demand. Tesla logged over 130,000 preorders for the Model 3 in the first few days after its announcement. The number now is anyone’s guess — Musk said the company doesn’t report how many reservations it currently has “because people read too much into it” — he wants to “anti-sell” the Model 3.

But the cars themselves don’t matter when the factory itself will be “just an enormous product,” a massive, automated machine churning out the vehicles of the future.