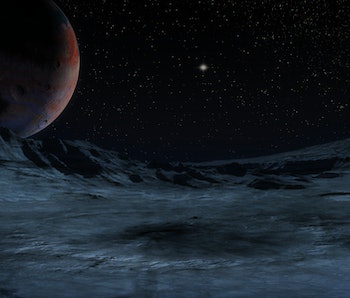 In 2006, Pluto was downgraded to the status of “dwarf planet,” much to the chagrin of children, educators, scientists, and anyone else who grew up learning the beloved tiny ninth planet that inspired a goofy dog’s name. But now fans of the wondrous little bugger can rejoice: Pluto may become a planet again. A group of NASA scientists is proposing a new definition of the word “planet” for this year’s Lunar and Planetary Science Conference from March 20 to 24 in The Woodlands, Texas — which would not only give Pluto planethood again, but also result in more than 110 official planets in the solar system.

Since their introduction into the astrophysics lexicon, dwarf planets have been marred by a perception that, as the label suggests, they are less important than standard planets. The new group of researchers — spurred by the incredible findings made by New Horizons’ flyby of Pluto — hope to correct this problem through a new definition.

“Many members of the public, in our experience, assume that alleged ‘non-planets’ cease to be interesting enough to warrant scientific exploration,” the proposal reads. Here’s the new definition.

A planet is a sub-stellar mass body that has never undergone nuclear fusion and that has sufficient self-gravitation to assume a spheroidal shape adequately described by a triaxial ellipsoid regardless of its orbital parameters.

In other words, planets are round objects in space that are smaller than stars. Stars are not planets, nor are stellar objects like black holes, white dwarfs, or neutron stars. But under this definition, Pluto would be a planet again. This also means moons like Earth’s moon, Ceres, and Charon would become “fullfledged” planets.

“The way humans classify things in nature is a reflection of how we understand nature,” Kirby Daniel Runyon, lead author of the proposal and an Earth and planetary sciences researcher at John Hopkins University, tells Inverse. “Nature doesn’t exist in discrete boxes. We as humans like to put things in boxes as a way to understand it. This is a way we can bring order out of chaos.”

This definition does not need to go through an approval process, but Runyon hopes educators will use this definition and start teaching it in classrooms.

According to the proposal, the new definition of “planet” follows current precedents. In current publications, sometimes scientists use the word “planet” to talk about a moon or a dwarf planet. Meanwhile, the team says the International Astronomical Union’s definition of a planet in 2006 is flawed.

The current definition says only planets orbiting our sun are planets, not those that orbit other stars or the “rogue planets” that orbit freely in the galaxy. Also, the definition requires zone-clearing, which no planets in our solar system do because small cosmic bodies often fly through planetary orbits. Finally, a zone would have to be clarified, and the math used to confirm if a body is a planet depends on distance.

“For example, even an Earth sized object in the Kuiper Belt (where Pluto orbits) would not clear its zone,” the proposal reads. At the time, Pluto was demoted because it did not clear the neighborhood around its orbit, and there were other objects that were similar in size in its path.

At the time, when scientists voted on the resolution, the margin was quite narrow. Alan Stern, the principal investigator for NASA’s New Horizons mission, called the definition a “disaster for science,” and still firmly believed in Pluto’s planethood. Unsurprisingly, Stern is one of the lead authors of the new definition proposal.

Runyon recalls that when this definition was announced, he was still an undergraduate. He was disappointed when he heard about it, but he tried to like it.

“At the time, I wanted to be OK with the definition, but I never felt OK with it,” Runyon says. “As I became more involved with working with Alan Stern, I really saw the illogic of IAU’s definition. My brain intuitively wants to call Pluto and other things like it a planet, and rather than suffer from this cognitive dissonance of, ‘this is not a planet,’ it’s better to have a broader definition of a planet.”

The new definition may completely change the way we learn about the solar system. It means our solar system has 110 known planets, and the number will keep growing as astronomers discover more planets in the Kuiper Belt. We may even discover another large planet near the Kuiper Belt known right now as “Planet Nine.”

“I’m hoping to get connected with education specialists to get this definition into grade school curricula,” Runyon says. “…It will change how we think about the solar system. If we can wrap our minds around it, that there are at least 110 planets, it carries a significance that eight planets lack, like, ‘wow, there are so many planets we need to visit.’”

It might also be more useful to think of the solar system in terms of zones. For example, the zone closest to the sun has rocky planets, the middle zone has gaseous, rocky, and icy planets, and the outer zone has icy planets. As for moons, teachers might say, “In the 2020s, NASA will send a spacecraft to study the planet Europa, which orbits around Jupiter as one of its many moons.”

Sure, it will be pretty hard to memorize all 110 planets, but the team behind the proposal says that students can just memorize the ones of interest, similarly to how there are 88 constellations and 92 natural elements, and people just learn the most significant ones.

Pluto was killed eleven years ago, but the new definition may just give it a new life. And then, scientists won’t have to worry about answering the question, “Why did you send New Horizons to Pluto if it’s not a planet anymore?”