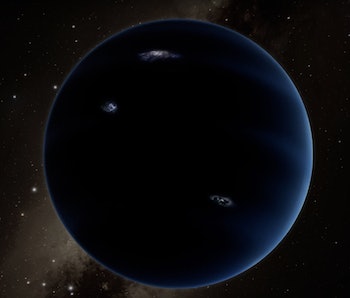 This week, a pair of Caltech astronomers uncovered evidence of a ninth planet in the solar system. Though 20 times farther from the sun than Neptune, this so-called “Planet Nine” is also about ten times more massive than Earth.

We say evidence, but not proof, because the infamous “Pluto Killer,” Mike Brown, and his colleague, Konstantin Batygin, haven’t actually observed the planet directly. Instead, like a good criminal investigation, we have all the clues that point to a planetary suspect.

Now it’s just a matter of finding the damn rock.

So why did it take so long for astronomers to finally pick up on the trail of something as big as Planet Nine? How was it flying under our noses the whole time? And why is it that we still haven’t even actually found it?

Let’s start from the beginning and first get acquainted with Kuiper Belt: the region of the solar system beyond the orbit of Neptune. As Brown told Inverse on Wednesday, the different objets zipping around the Kuiper Belt are distributed and rotating around the sun in their own unique ways. There’s no reason to think they would be exhibiting similar movement patterns of any kind.

And yet, in 2014, one of Brown’s postdocs co-authored a paper that illustrated how 13 of the most distant objects in the Kuiper Belt that were orbiting the sun were oddly similar. Brown took notice, and began a more in-depth observation of these objects with Batygin.

The pair noticed the six most distant of the 13 objects all had elliptical orbits around the sun. That’s a pretty weird coincidence itself, but even weirder is the fact that all of the orbits also veered in the same spatial direction. Brown likens this to seeing multiple hands on the same clock all pointing to the same number — even though all the hands are moving at different rates.

Furthermore, the orbits of the six objects all tilt at about 30 degrees in the same direction. There’s only a 0.007 percent chance of that happening. Something was causing a disturbance large enough that would affect all six objects in the same way. Enter the idea of a ninth planet.

It’s important to note here that to identify these kinds of patterns and trends among orbital objects in space, you have to observe them for a really long time — at the very least, several months. Brown and Batygin spent about a year just making observations and collecting enough data to verify these patterns that would suggest the existence of a ninth planet.

It’s easy to understand that taking on such a project means blocking off a lot of time for something that may or may not pan out. No time spent in scientific study is ever truly wasted or in vain, but if Brown and Batygin actually found that no such patterns existed, the results would have been discussed as a footnote — not a paper.

Anyway, the key to understanding what is going on in this situation is gravity. You need an object or a series of objects that can exert enough gravity to keep a subpopulation of objects clustered together. Brown and Batygin quickly ruled out that multiple objects were a cause, since this would have required the Kuiper Belt to be populated with 100 times more mass than it actually possesses.

The next best explanation was a planet. A big one.

If your first instinct is to grab a telescope and look for the planet, congratulations: you’d be a terrible scientist. Space is big. If you want to use your time effectively, you have to be much more certain about where to look if you don’t want to spend the rest of your lifetime staring off into darkness.

The astronomers ran a series of simulations that would place a planetary object in the vicinity under different conditions and see which one correlated with the orbital data they had collected. They weren’t having much luck until, in what was basically an accident, they ran a simulation with a planet in an anti-aligned orbit. That means when the suspected planet would be at its closest approach to the sun — a position known as its “perihelion” — it’s also 180 degrees across from the perihelion of all other known objects. And in this configuration, the simulation lined up with the data.

Brown and Batygin thought they did something wrong. “Your natural response is ‘This orbital geometry can’t be right,’” Batygin said in a statement.

“This can’t be stable over the long term because, after all, this would cause the planet and these objects to meet and eventually collide,” Batygin said.

Not so in this case, thanks to something called mean-motion resistance, where objects that approach each another exchange energy to keep from colliding, and maintain stable orbits. Planet Nine gently pushes the orbits of other distant Kuiper Belt objects so that every thing is safe and nobody gets hurt.

This is a very strange kind of orbital phenomenon — and certainly not one astronomers would immediately think of when trying to explain the motion of planets. But in this case, this explanation doesn’t just provide a sound explanation for how and why the previously mentioned six objects move the way they do. It also sheds light on why Sedna and 2012 VP113, two other Kuiper Belt objects, are not gravitationally affected by Neptune the way other Kuiper Belt objects are — because Planet Nine is pulling them away from the eighth planet.

Furthermore, this simulation also matches the positions of four other objects with orbits moving along one perpendicular line from Neptune and that of another object — which we now know is Planet Nine.

So what does all this data give us? Basically, the only thing we know for sure is what Planet Nine’s rough orbit looks like. And it’s a pretty long orbit — it takes something like 10,000 to 20,000 years for the object to complete a full orbit around the sun. Overall, trying to find Planet Nine will be something like looking for a needle in a haystack: You’re looking for something that by itself is very distinct, but just a tiny speck in the vastness of space.

Since Batygin and Brown only just published their findings, the race essentially starts now. If the planet is in very distant parts of its orbit, only the world’s largest telescopes — like the W.M. Keck Observatory and the Subaru Telescope, both in Hawaii — will find it. If it’s closer, less powerful instruments have a chance to spot it first.

If you’re intent on finding it first, you better make your way to one of these telescopes pronto. And while you’re at it, brush up on the rules for naming planets!

More like this
Science
7 hours ago
ESA's New Juice Mission Might Finally Uncover Jupiter's Hidden Secrets
By Doris Elín Urrutia
Science
Feb. 6, 2023
How the Webb Telescope is Rewriting What We Know About the Early Universe, One Galaxy at a Time
By Doris Elín Urrutia
Science
Feb. 5, 2023
What Mysteries is the Universe Hiding from Us? A Cosmologist Weighs In
By M. Mitchell Waldrop and Knowable Magazine
LEARN SOMETHING NEW EVERY DAY.
Related Tags
Share: