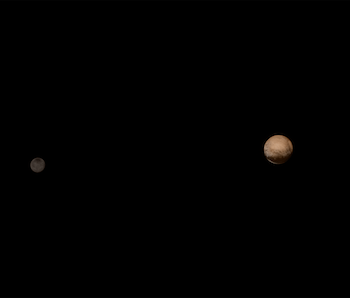 We get to fawn over a new set of cosmic fraternal twins thanks to NASA’s satellite New Horizons, which just took the first images of the surface of Pluto’s largest moon, Charon. There was a brief moment of panic earlier this month when computer error put the probe into safe mode, but — as if to make up for lost time — New Horizons is transmitting stunning shots from roughly 3.7 million miles out of the Pluto-Charon system.

Charon is just half the diameter of Pluto, but that’s enough to qualify as the largest moon relative to its dwarf planet, and, as iO9 notes, it’s enough to pull Pluto into orbiting around its center of mass. While the two have some similarities, NASA’s analysis of the images describes two very different places:

“A high-contrast array of bright and dark features covers Pluto’s surface, while on Charon, only a dark polar region interrupts a generally more uniform light gray terrain. The reddish materials that color Pluto are absent on Charon. Pluto has a significant atmosphere; Charon does not. On Pluto, exotic ices like frozen nitrogen, methane, and carbon monoxide have been found, while Charon’s surface is made of frozen water and ammonia compounds. The interior of Pluto is mostly rock, while Charon contains equal measures of rock and water ice.”

As incredible as these images are, it’s still just a warm-up. If you really want your mind blown wait until July 14th when New Horizons will get within 7,800 miles of Pluto’s surface, and it gets real.