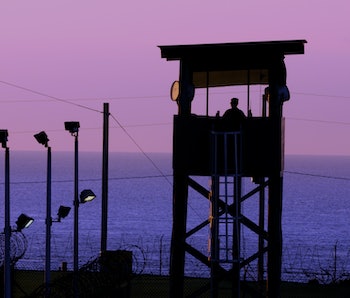 Can scientists and politicians collaborate to redeem one of the most embattled places on Earth? On Saturday, at the annual meeting of the American Association for the Advancement of Science, Joe Roman, a conservation biologist at the University of Vermont, presented his proposal to turn the United States military prison at Guantanamo Bay into a scientific research facility and peace park.

Roman says that the project could help Cuba protect and study its valuable marine ecosystems, while also providing a common goal around which the United States and the island nation could continue to normalize relations. As an added bonus, converting the facility would relieve American taxpayers of the nearly half a billion dollars a year it takes to run the base.

Guantanamo Bay has been a flashpoint of political and human rights debate for years. The Cuban government has called the American base an illegal occupation, and terrorism suspects are approaching typical retirement age, sometimes without being charged with any crime. The U.S. has leased the base from Cuba for over 100 years, but the situation has become much more contentious in this century.

The U.S. government even had Gitmo on a list of bases that it was considering closing, in part to ease relations with Cuba. But since 9/11, the military prison at the base has seen a new life as a detention site for terrorism suspects. Since that time, stories of detainee abuse in the facility have become an international black eye for the United States.

“Guantanamo has been a recruitment tool for terrorist organizations,” Roman says.

Roman, who has collaborated with Cuban scientists for five years, hopes that he can see the facility once again enter a new phase of life.

“We think the best use of the base is to convert it into a research station and marine peace park, as a first step towards returning it to Cuba,” he says.

He says his colleagues — not just scientists, but military personnel as well — have been enthusiastic about this proposal, which is an appealing call for international cooperation and reconciliation. But Roman also sees it as a practical consideration. The military base costs hundreds of millions of dollars to run, and Roman says that if Cuban and American scientists could instead use it to collaborate on the big problems facing humanity in the 21st century, like climate change and biodiversity loss, the benefits would be immeasurable.

The facility, which is fenced-in and composed of simple rooms, already possesses the backbone for a lab facility. Roman says the current base and barracks could be adapted without having to tear anything down.

The prospects for this project are mixed, though. In 2014, when normalization of United States and Cuban relations started, Roman began feeling more hopeful.

“Obama had pledged to close the base, but now things have changed,” he says. “[President Donald Trump] has said he’s going to continue using the detention center.”

During his presidency, Barack Obama couldn’t get congress to close the detention facility at the base, so the future of this Guantanamo Bay research station might not be much worse off now than it was a year ago. It might not be much better, either.

Roman is hopeful for the future of the project, though. He plans to continue building bipartisan support, regardless of the political administration. “This kind of proposal requires long-term vision,” he says.