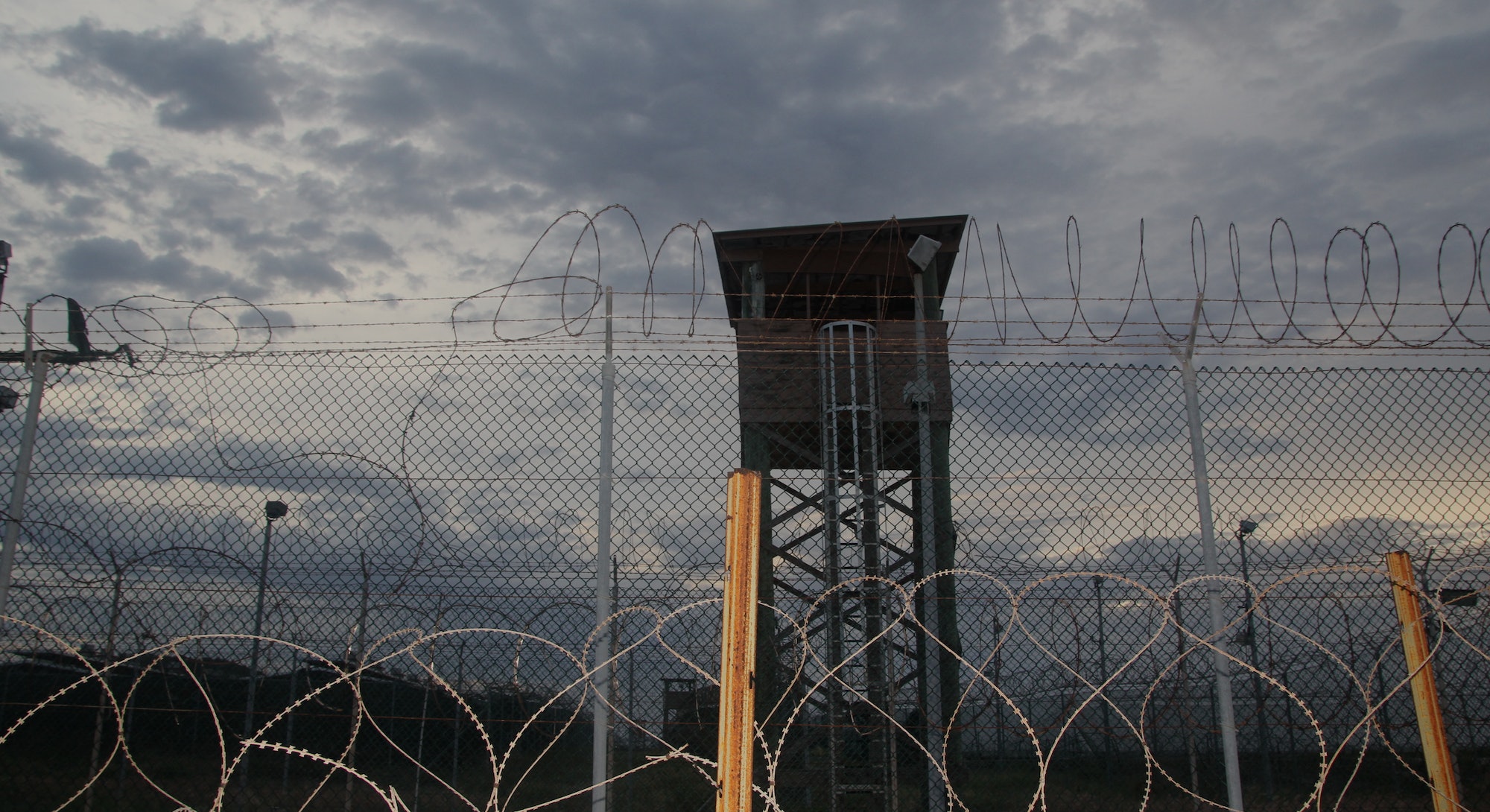 The first thing I see when we walk into Camp 6 is a detainee rolling an exercise bike out of the sally port that guards use to deliver food and other items to the men held here. The prisoner can’t see me. I’m behind one-way glass and in very dim light. As he wheels the machine back into the cell block’s communal living area, I snap a photo, but the image comes out blurry and ghost-like, unclear despite my close proximity. It’s not a bad metaphor for what it feels like to report from this place in southeast Cuba.

More than half of the 80 men imprisoned at Guantanamo Bay are housed in Camp 6, a medium-security facility that allows for group living for inmates who have been deemed compliant. Immediately next to it is Camp 5, a maximum security prison. But we’re not allowed inside Camp 5, which holds between ten and 20 captives. After we leave Camp 6, our handlers — called Public Affairs Officers, or PAOs — shepherd us off to the next stop on this highly choreographed one-day tour.

What about highly secretive Camp 7, which holds the alleged 9/11 conspirators and other high-value detainees? No one from the press has ever been able to see that. How many people can that facility hold?

“I know the maximum capacity of Camp 7,” Admiral Peter Clarke, the Commander of the Joint Task Force, says. “But I’m not going to tell you.”

“We have mental torture in the Camp 7,” Hassan Guleed, an alleged member of East Africa al-Qaeda, said in a military court. Sounds, vibrations, and chemical odors were all used to get captives to cooperate, he said.

“In the black site there was physical….” Guleed said, until the judge cut him off before he could get into details about his classified imprisonment.

It was Guleed’s first appearance in court since being captured in 2004. The Associated Press reported that courtroom monitors cut the audio of the proceedings twice so classified information couldn’t be heard.

President Barack Obama has long said he wants to shutter the detention facilities here, but time is running out for him to make good on that promise of his first campaign. And despite claims to the contrary from the White House and the military, the prison system here is becoming more secretive in the final months of Obama’s presidency. On previous tours, reporters had been allowed to see Camp 5 on visits that sometimes lasted four or five days. Then, last October, the military instituted a black-out on all media tours. In February it reinstated trips, but they were significantly trimmed down.

There’s no evidence that reporters are barred from Camp 5 to hide mistreatment of detainees. Rather, there seems to be an uptick in the reflexive secrecy around the operations carried out in the detention centers at Guantanamo Bay in recent years. For instance, the military used to regularly provide the media with a daily breakdown of inmates on hunger strike — or, as it’s known here, long-term non-religious fasting. Then, in 2013, the military instituted a blackout on providing reporters with that information, a policy that continues to this day.

Now, we’re given vague descriptions, such as that a “handful” of detainees are on hunger strike. Sometimes military officials provide reporters with obtuse word problems to describe the number of hunger strikers. “It typically ranges around 5 percent, that’s where we’ve been historically,” says Navy Captain Richard Quattrone, the senior medical officer, when asked about the number of hunger strikers. He adds that half of that roughly 5 percent voluntarily drink Ensure, which means they don’t have to be force-fed through a tube in their nose. The actual numbers, however, remain hidden.

Similarly, members of the media used to be allowed to tour Camp X-ray, the iconic, open-air prison from Guantanamo’s earliest days that still remains the defining image of the notorious prison. On this trip, though, X-ray was off limits too. (I was allowed to see X-ray in 2013.)

Over the course of our tour, there are never fewer than seven or eight military handlers hovering nearby. Before we leave the base, PAOs go through all of our photographs and video to delete any images that don’t comply with operational security guidelines reporters are forced to sign to make the trip.

The official reason we’re told we can’t see Camp 5 is straight out of Catch-22. I ask Clarke why we were barred from seeing it. “Partly because of time constraints,” he says. “I made the decision that with the limited time in a one-day visit, which is what we have available now, that we would limit the visit to one camp, Camp 6, being where the majority are.”

That begs an obvious question, though: who determined our stay would be prohibitively short? The answer, unsurprisingly, is that it was (in part) Clarke. “The one-day media visit is a policy decision that was made jointly between U.S. Southern Command and us,” Clarke says. I ask if he could have argued in favor of a two-day trip. I could have, yes. I did not, because it has a “significant impact on my operations.”

To re-cap: we can’t see Camp 5 because our trip is too short, and our trip is so short because the commander didn’t want us to see Camp 5. As Yossarian, the protagonist in Joseph Heller’s iconic novel says, “that’s some catch, that Catch-22.”

The guard force at Guantanamo ranges between 1,950 and 2,200 people, both soldiers and civilians. Still, according to Clarke, that’s not enough to facilitate a tour of Camp 5. “There’s only one of me,” he says. “There’s only the same PAOs that deal with everybody, there’s only one [guard force commander], Colonel [David] Heath. And the others who are on a watch rotation and standing the watch at midnight don’t need to be distracted.”

Describing the media as a distraction cuts counter to standard military talking points around Guantanamo. In general, high ranking military officials give lip-service to the idea that the media plays an important role in correcting against the government’s tendency for secrecy. After all, the word “transparency” is literally in Guantanamo’s motto as one of the detention center’s four key values.

Clarke’s poor view of the media extends beyond Camp 5. When asked why he had taken Camp X-ray – long since shuttered and overgrown – off the tour, he offered several explanations, including safety precautions and the fact that “Camp X-ray has nothing to do with today’s Joint Task Force. I have no operations there.” But when a reporter pressed him on the value of seeing the camp that has come to symbolize Guantanamo, he offered a troubling explanation for why the public perception of Guantanamo remains tied to Camp X-ray. “I think it is an image that is perpetuated by media and special interest groups, but the reason I don’t authorize media visits there is because it has nothing to do with our operations today,” he says.

Of the 80 men held at Guantanamo, 30 have been cleared for transfer. The Guardian reported recently that the administration is planning as many as two dozen transfers by the end of July, a move that would clear out most of the detainees who can legally be moved out of the prison.

As for what the future holds, Clarke predicted that a year from now the detention centers will house fewer detainees, and Camps 5 and 6 would be consolidated — but he wouldn’t speculate on whether they would be closed under Obama’s watch. He also wouldn’t comment on remarks by presumptive GOP nominee Donald Trump that as president he would send more people to Guantanamo. Right now, Camps 5 and 6 can hold a total of about 275 people.