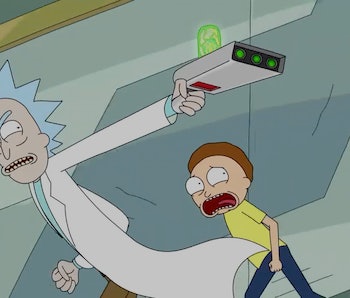 It’s been more than a year since the last new episode of Rick and Morty aired in October 2015, and rabid fans have been left to pick apart every piece of the show’s considerable minutiae. We’ve analyzed every publicity stunt from Adult Swim, including the show’s official mobile game Pocket Mortys, the Season 3 website, and ancillary comics. The Inverse staff has explored what the show does for philosophy, metaphysics, and religion.

This week, we banded our science and entertainment team together in order to determine which of Rick’s inventions are the most realistic. Using real-life engineering, how close are we to developing, say, the helmet that makes Snowball intelligent? Will we be tuning into interdimensional cable anytime soon?

Neel Patel: Morty, desperate for his crush at school to fall for him, asks Rick to give him a love potion that will cause her to be instantly infatuated with our loveable teenage loser. The talents of Rick are way beyond this shit, so he simply gives Morty a vial of oxytocin extracted from a vole — “a rodent that mates for life, Morty. This is the chemical released in a mammal’s brain that makes it fall in love.” Combined with some of Morty’s DNA, the potion works! Annnnnd it sort of leads to the doom of the entire planet. Who figured.

But could oxytocin really work in real life as a love potion? Perhaps. Oxytocin does play a role in social bonding, sexual affection between partners, and fostering strong connections between mothers who are nursing newborn babies. The problem is, oxytocin can also augment memories of when bonding goes bad. Do you hate your mom? Oxytocin will make you remember that hatred tenfold. Remember when your scumbag ex cheated on you? Oxytocin will make you relive that nightmare again and again.

In other words, an oxytocin-based love potion will either make you feel crazy for someone, or basically make you feel plain crazy.

Emily Gaudette: Okay, that actually makes sense within the events of the episode! Remember, Jessica’s affection for Morty doesn’t last very long — after a few minutes, she experiences this crazy rage when she thinks Morty is trying to get away from her. “Love” becomes savage, animalistic aggression when drugged-up Jessica perceives other humans as getting between her and Morty.

We see later that Rick didn’t really think the potion through, and of course, he has to take Morty into a new reality to escape the one they’ve completely destroyed. That does make me wonder about perfumes that are supposed to have pheromones in them; is there a way to chemically make people lose their minds with lust? Is oxytocin the closest thing we have?

Neel: I would think so. I suppose it really depends on what kind of aphrodisiac you think would work best. Some think testosterone works best, since it’s so closely linked libido, but there are other substances that seem increase or decrease libido in individuals. It’s anyone’s guess.

Neel: Rick fuckin’ runs around through interdimensional portals and shit. That’s just how he’s rolled since the pilot. Rick’s portal gun allows him to move between different dimensions, or universes, if you prefer that vernacular. The show basically uses the terms interchangeably, so we will too.

The notion of multiple universes collected together to form the so-called “multiverse” is a pretty well-accepted phenomenon among physicists. The question, then, is whether those dimensions are capable of interacting with one another in any way since interactions would basically open up the possibility that an individual could access those dimensions.

Emily: Funny that you can’t talk about interdimensional travel for very long without getting to the subject of regulation. We see in Close Rick-Counters of the Rick Kind that the Council of Ricks has started to monitor portal gun use. The Council nabs Rick C-137’s portal gun to track where he’s been going, and he says something like, “Hey, don’t look at a guy’s portal gun history,” like it’s his browser history or something. So, how close are we, realistically, to traveling like that?

Neel: Well, there is some data to suggest that light can leak from parallel universes can leak into ours. And one possible way they could be bridged for interdimensional travel is through a wormhole, a hole in spacetime. Most research into wormholes simply hinges on how they would operate in a single universe — ours — and perhaps let us travel vast distances through space or backwards in time. But it’s not unthinkable that Rick’s portal gun actually opens up wormholes to different dimensions anyway. If a wormhole can create a hole in spacetime, this could be extended to spacetime holes that pierce through into an entirely new universe.

Neel: Inception didn’t make any sense, and neither does Rick’s dream hopper.

Emily: I’m so glad to hear you say that. I hated Inception so much, so I’ll take your scientific opinion on the film as permission to keep hating it.

Neel: Well, a device that lets someone enter other people’s dreams is just way too off the realm of possibility.

Emily: So, as fun as it would be to meet someone like Scary Terry, that’s not likely?

Neel: Well, if we’re all connected to one another by way of digital devices and a common server … Hear me out: Many futurists think we might live in a potential future in which our brains — like all of our devices these days — are connected to the cloud, and able to interact across a digital interface. Perhaps we’ll all be fitted with a Black Mirror-esque neural implant that gives us instant access to digital tools in some capacity. And perhaps, taken a step further, our minds are capable interacting with one another across a digital plane.

Neel: A freeze gun is probably the easiest thing to make on this list. It’s simple: a high-powered liquid nitrogen gun. That shit is dangerous, and pretty much just turns you into Mr. Freeze or Captain Cold. (Or this weird-ass guy ….)

Emily: Wait, that’s it? You don’t have to invent anything else? Why don’t we have crazy people running about with freeze rays then, like Dr. Horrible?

Neel: Not really. Rick’s thing works sort of too fast and too localized for modern technology, but I can’t really what might stop someone in the future from inventing a liquid nitrogen gun that could basically freeze someone almost instantly. Hopefully they’re villainous charisma is more like the comic version of Mr. Freeze and less the Schwarzenegger version, but hey — beggars can’t be choosy.

There is no current release date for Rick and Morty Season 3.