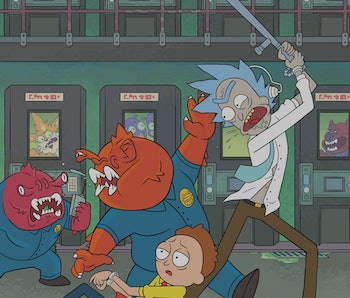 It appears Adult Swim’s most prized property, Rick and Morty, will continue expanding into other mediums while its fans wait to devour Season 3. Even if we can’t watch new episodes of Dan Harmon and Justin Roiland’s hit sci-fi comedy anytime soon, we’ll be able to read free comics from Oni Press.

Free Comic Book Day, an event full of hit-or-miss special issues, is approaching, and Oni Press had just announced a new Rick and Morty story to mark the occasion. Luckily, Rick and Morty comics are pretty fantastic, and they’ve only gotten better since Zac Gorman took over.

The new free issue will include several vignettes, including the comic’s very first arc, Part One of The Wubba Lubba Dub Dub of Wall Street and a Pocket Mortys-themed story based of Adult Swim’s insanely popular mobile game.

This issue, instead of furthering the story already at work in Rick and Morty comics will attempt to reintroduce fans of the show to the ongoing comic book world. Read our full, exclusive preview below, and download the pages for yourself here.

Ah, another gadget that will either get Morty arrested or killed.

Yeah, don’t hold out for an answer on that one, Morty.

Free Comic Book Day is May 6.