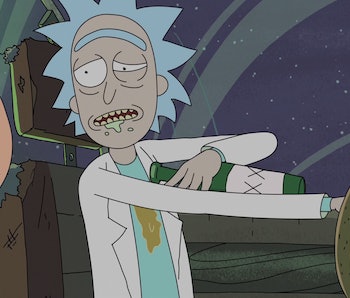 Adult Swim heard its fans screaming for Rick and Morty Season 3, and instead of airing new episodes, it launched a new website full of weird-ass Easter eggs. If you go to GalacticFederation.com, the website routes you to Earth’s new homepage on the Federation’s domain. The website urges you, an Earthling, to sign up for your Federation rewards card. From the season finale, fans know that the Federation provides every Earth citizen with a paying job, and instant antidepressants if needed. If you try to sign up for your benefits on the website, however, you’re routed into the Gromflomite prison system interface. That’s where things get super complicated.

It took Redditors approximately 60 seconds to track down Rick Sanchez in the website’s system, where his crimes are still listed as “everything.” The real meat of the website comes from reading the Gromflomite guards’ discussion boards. Though they share videos of cats from the Rick and Morty version of BuzzFeed — BlurtFeed — they also speak pretty candidly about the events of the Battle at Blood Ridge. A collection of veteran accounts includes several references to Rick Sanchez and his war buddies, Squanchy and Birdperson. In particular, it seems Rick was infamous among his enemies for teabagging fallen soldiers.

Almost immediately Rick Sanchez comes up and rips the body from my arms, takes off his pants, and then proceeds to rub his human lower danglers all over the soldier’s dying face. […] Rubbing one’s lower danglers on another’s face is considered a fun goof in human culture, but the joke is lost on Plonk. […] The dangling. I’ll never forget the dangling.

The site, perhaps unsurprisingly, makes several uncomfortable references to concepts like “interspecies relationships” and cultural appropriation, and it’s clear that the Gromflomite discussion boards are meant to poke fun at these concerns. That particular tone aside, a lot of the commentary on irreverent Earth internet culture is gratifying; it’s clear that after occupying Earth, many Gromflomite soldiers started wasting their time on clickbait articles and videos of cats.

Rick and Morty doesn’t currently have a Season 3 release date, but we can probably expect more stunts from Adult Swim in the next few weeks.