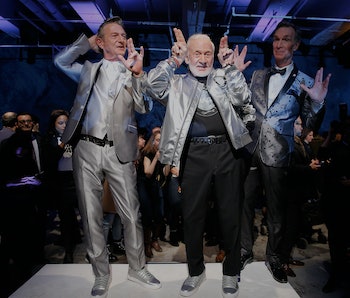 On Wednesday, famed astronaut and badass Buzz Aldrin took one small step for a man, and one giant leap for space fashion when he became the first astronaut to walk New York Men’s Fashion Week. Aldrin walked the runway for designer Nick Graham’s Life on Mars: Fall/Winter 2035 collection, closing the show in a sleek silver bomber jacket and shirt emblazoned with his catchphrase “Get Your Ass To Mars.”

Aldrin wasn’t the only science celebrity working it at Graham’s show. Bill Nye “The Science Guy” and host of the upcoming Bill Nye Saves the World narrated the fashion show, while Aldrin worked the runway. Graham, who says “Mars is the new black”, named the show as a tip of the hat to Aldrin’s prediction that humans will begin to colonize Mars in 2035 — two years after NASA predicts we will land on Mars.

“I’ve walked on the moon, so how hard can it be to walk in a fashion show?” Aldrin said in a statement before the show. “Nick’s collection is very Mars-friendly and every astronaut should look their best when they land there.”

And diggity damn, did Aldrin and his fellow models look their best, sporting metallic rainwear, sharkskin suits, and space-themed formalwear.

While the show was based off the colonization of Mars, Nye offered a different, ever-so-slightly Elon Musk-bashing message in the closing remarks of his fashion lecture.

“There thing is, to have colony on Mars — I think that’s not an especially good idea,” Nye said. “There’s not a substitute for Earth. This idea we’ll go Terraform Mars, you’re freaking high. There’s no way — the Earth is it. So you gotta take care of it.”

Aldrin, who claims that the first thing he did on the moon was pee, claimed to the Los Angeles Times that his astronautics degree from M.I.T. helped him along the fashion runway.

“I wasn’t sure what side to get on,” said Aldrin. “If I walked too close to the people, then not enough of them would see. I’m always calculating time an distance.”

He also calculated how to dish out a impressive “Blue Steel.”

Space inspired fashion has long been a thing, but the space industry has become increasingly fashionable as well. We’ll have to see if NASA is inspired by any of Graham’s designs — in the meanwhile, where can we get one of those “Buzz” friendship bracelets?