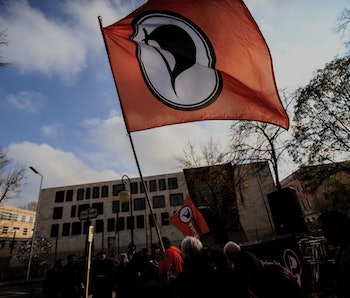 They didn’t gain as many seats as they’d hoped, but Iceland’s Pirate Party, built on the idea that people should have privacy and governments shouldn’t (and awful nautical puns) remains a force to be reckoned with in Reykjavic. The party’s gains have already prompted the resignation of one prime minister, but the new one looks more resilient despite scandal. Now, with ten seats in Iceland’s 63-seat Parliament, the political darling of internet activists worldwide has a chance to enact real legislation — if they can get around a governing coalition that excludes them.

The Pirates have a policy platform, but it’s more of a skiff and less of a tall ship. Still, it does provide a solid framework for their objectives going forward. The vast majority of their stances revolve around the adoption of a new Icelandic constitution. From there, the Pirates are seeking to create a universal health care system and provide mechanisms for the general public to propose or veto laws, which they say will also serve to increase governmental transparency, accessibility, and accountability. They want to alter government policy and also government user interface.

But pushing for substantive changes might prove difficult in the wake of the Pirates’ exclusion from the new government, which was made official one week ago. Over the two months since the election, the governing coalition was formed with the Independence Party at its head. It’s a coalition by the slimmest possible of margins (controlling 32 of 63 seats), but it’s a majority nonetheless. This isn’t the best news for the Pirates, who, back in December, actually seemed poised to beat the Independence Party to the punch. Informal talks about a coalition took place between the Pirates and several other opposition groups. But the talks didn’t pan out.

Now, with its ten seats, the Pirate Party constitutes the largest minority group in the Icelandic Parliament — a seemingly appropriate situation given its name. Considering the narrow majority by which the coalition holds its power, things could be worse. While their bolder initiatives may find themselves tabled for the time being, the Pirates will likely be continuing with their fight for governmental transparency. Their populist ideals will likely put them in conflict with new Prime Minister Bjarni Benediktsson, who himself was named in the infamous Panama Papers and who said that the Pirates’ lackluster election day performance represented “a stand against populist ideas.”

Even so, the Pirate Party and its supporters remain undaunted.

That’s because for a populist group like the Pirate Party to hold so much power in Iceland is unprecedented. Given the fragile majority of the Independence Party’s coalition, the Pirates’ could prove to be a powerful obstructive force if they detect a policy direction that brings Iceland farther away from the populism of their platform. They could hijack votes, ransack debates, and maroon proposals in hopes that they can rekindle the huge popular support they enjoyed earlier in 2016.

There also appear to be areas ripe for cooperation. Both the Pirates and members of the conservative coalition have indicated support for a public referendum on Iceland’s status with the European Union. It would be a kind of reverse-Brexit since Iceland isn’t actually in the EU — although it is a member of the European Free Trade Association. Proposals to join the EU in the past have met with a lukewarm reception from Icelandic voters. But, the Pirates insist the country needs an “informed” campaign. There’ll be none of the nativism and anti-immigrant sentiment of Brexit if they have anything to say about it.

More like this
Culture
5 hours ago
Lost never solved its weirdest sci-fi mystery, but this episode came close
By Jake Kleinman
Culture
Feb. 4, 2023
The End of the Cold War Could Have Killed James Bond. Instead, it Made Him Stronger.
By David Grossman
Entertainment
Feb. 3, 2023
James Gunn's Cohesive DCU Vision is a Radical Misstep for One Huge Reason
By Mónica Marie Zorrilla
LEARN SOMETHING NEW EVERY DAY.
Related Tags
Share: