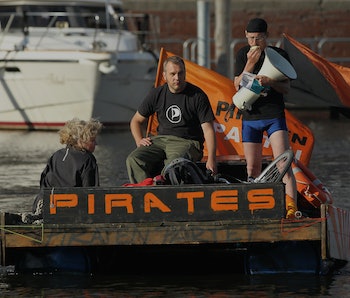 Ahoy! The Pirate Party was founded in Sweden in January of 2006. A few months later, the U.S. had its very own version of the swashbuckling-monikered political movement courtesy of University of Georgia graduate student Brent Allison. Ten years later, the party is a big deal in Europe: It’s leading in the polls for Iceland’s 2017 election cycle. So, what’s the deal with these scallywags? I phoned up outgoing United States Pirate Party chair Andrew Norton “near Macon, Georgia” to find out more, to bask in his British accent, and find out that he’s kind of, sort of feeling the Bern.

Editor’s Note: After our conversation, Norton posted a resignation from his command, effective March 1st.

Are you associated with, say, the Iceland Pirate Party?

Yes, yes, and the rest of them.

It sounds like the Pirate Party eschews conventional leadership roles.

Well, I’m also governor of the UK Party. I also was the first head of the international Pirate movement back ‘08 and ‘09. My personal leadership style is very hands-off. There’s actually a technique we use in the English-speaking countries called the “Three Pirate Rule.” Which means that anything that three pirates sign off on is generally okay as long as it abides by the general principles.

Can you speak to those general principles?

As a party we have three main planks. The first one is government accountability and transparency. A government that’s transparent and accountable to the people is the only good, effective government. Because, otherwise, things get hidden. The second is an increase in personal privacy. And that’s essential for any good, effective democracy to happen; otherwise it’s far too easy to blackmail and coerce people into doing stuff, especially if you have the power of the state behind you. And the third is a reform of copyright, patent, and trademark laws. Because, at this point, they’ve become an impediment of progress of society as a whole. Underlying all three of those is our whole platform of evidence-based policy. So, all policy must be based on evidence, not theory or ideology or anything else but facts and data.

Is anything different for you guys because it’s an election cycle?

As a small party, every day is a hard-won struggle. I’ve worked with the parties extensively in the UK and here. I started a libertarian campaign in 2004, I used to be with the Conservative Party in the UK in the early 2000s, and, before that, got my start in the Liberal Party in the UK. For a small party in the U.S., it’s a constant struggle to even stay existing. There’s apathy that if you’re not one of the big two then you’re a waste. Most state laws are extremely tilted toward dissuading small parties from even existing in the first place. So they make it almost impossible to get registered and stay registered. Even the Libertarian Party has difficulty staying on the ballot in all the states. Most state laws have two sets of laws: One for the major parties and then another set for minor parties. It’s not a good thing for democracy when you’re actively trying to dissuade political parties and alternative candidates from even being recognized.

Is there any candidate in either of the major parties that you’d be more sympathetic to?

We’ve been discussing whether or not we should endorse anyone, as a national group. We could just leave it to the state parties. The last time we endorsed somebody, it was Barack Obama in January of ‘08. And then we ended up having to rescind our endorsement of June of ‘08 because he signed onto wireless wiretapping, which contradicts one of our main standings.

For me, personally, in Georgia there are only three choices: Libertarian, Democrat, and Republican. The Libertarians have been getting ever more wacky over the last 10 or 12 years. The Republicans are whole bags of crazy. There’s no polite way of saying it. In my history courses, I studied Germany between the wars and I’m seeing strong parallels between the Republican Party and the National Socialist German Workers’ Party in the early ‘30s.

I was actually a strong supporter of Lawrence Lessig, having known him a good number of years. Out of the two who are left, I’d be loathe to endorse Secretary Clinton because of her involvement with the Trans-Pacific Partnership deal. That is a massive no-no. All Pirate Parties around the world are strongly against it because of its lack of transparency, giveaways to unaccountable corporate entities, and its sheer opaqueness in negotiation and discussion. So, the only one left who is even possibly an option is Senator Sanders. He’s made some of the right noise: He’s been quite big on privacy. But, we’ll see how he does in the long run, because once burned, twice shy.

More like this
Innovation
7.30.2022 11:00 PM
Here’s exactly how tech companies and apps conspire to track you 24/7
By Peter Krapp and The Conversation
Innovation
8.4.2022 11:00 AM
X-Ray study adds to the mystery shrouding shrunken heads’ origins
By Sarah Wells
Innovation
15 hours ago
Scientists may have revealed the ancient secret behind China’s Bronze Age
By Sarah Wells
Related Tags
Share: