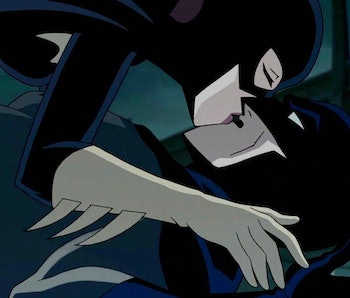 The DC Extended Universe had a bizarre, unbalanced 2016. While DC Comics outsold Marvel month after month, proving that some timeline resets are worth the effort, DC Entertainment’s films made a ton of money, but were absolutely destroyed by critics. Rather than apply value judgment to the many decisions made by the folks at DC, we’ve decided to round up the weirdest of their developments.

Let’s get this one out of the way. Zack Snyder’s Batman v Superman is a near joyless slog through loosely connected plot points. Somehow, the fact that Superman and Batman’s mothers share the same name, Martha, managed to squeak past Lex Luthor pissing into a jar as the film’s most ridiculous stunt.

Why was the “Martha” scene so strange? Snyder was hellbent on including Bruce Wayne’s “slow motion pearl necklace” origin story in his film, despite DC fans having seen it play out multiple times in previous films. Then, by embedding both Batman and Superman’s mothers into the film’s third act, Snyder drew a weird connection between the two heroes, as if grasping at straws for something that could bring them together. Was it their shared reverence for human life that saved the day, or their experiences with isolation? Nope, just the mere fact that they both have mothers named “Martha.” The reveal was a cheap, gutless move, and it served as the final nail in the BvS coffin.

When we read Geoff Johns’s last DC Comic for a while, sitting across from him in a press room in Manhattan, the room of reporters was utterly silent. Johns knew the impact the “Watchmen” panel was going to have on readers, and he leapt out of his chair to stop a reporter from flipping too far in the book without reading it. “No! No, trust me, you don’t want to do that,” he cried.

Whether Batman finding the Comedian’s pin in the Batcave will turn out to yield a successful storyline still remains to be seen. The Rebirth titles that followed Johns’s issue sold very well, but none of the issues have fully committed to integrating the Watchmen into DC’s universe. Still, the choice to blend the properties was a weird one, indeed.

The Power Rangers beat the crap out of Batman

DC enacted quite a few crossovers with the properties it juggles, including the Hanna Barbara reboot comics, but the company reached beyond its licensing borders to add the Power Rangers into a Justice League story. In their first appearance alongside DC’s superheroes, the California teens beat the stuffing out of Batman, who spent the duration of the fight wondering how the hell they got so strong. Everyone knew the Justice League working with the Power Rangers was bound to be complicated, but having them indisputably wreck Batman right out the gate was stunning.

Diggle couldn’t care less about his daughter being erased

Barry’s timeline fuckery spread into DC’s other Arrowverse shows this year, and when he manipulated certain events on Arrow, John Diggle’s daughter Sara was erased from existence. Although Diggle is certainly one to hold a grudge — keep in mind he was obsessed with Deadshot having killed his brother — upon learning about Sara’s erasure, he responded rather quickly to Barry with a big ol’ shrug. The plot development wasn’t a particularly important one in the long run, but it was certainly odd.

Batgirl had sex with Batman on a roof

In the animated, R-rated film version of The Killing Joke, DC signed off on adapting the classic graphic novel, in which Joker paralyzes and (presumably) sexually assaults Barbara Gordon by … adding a long prelude to the film in which Barbara first has sex with Batman. Instead of adding context to a storyline that essentially put Batgirl in the “fridge” (that phrase, by the way, refers to a problematic DC comic) The Killing Joke simply doubled down on Batman’s quest to avenge Barbara by making her one of his sexual partners. Oh yeah, and the film added yet another storyline in which Barbara couldn’t see through a villain’s flirtations, and became entranced with him, simply because he kept hitting on her.

The Killing Joke’s misunderstanding of sexual politics, and its surprisingly simplistic animation style, made it one of the weirdest choices DC has made in years.

Supergirl, after having moved home with the rest of the DC shows on the CW, teased its second episode with a poster referencing Crisis On Infinite Earths #7. Fans buzzed around speculating what might kill Supergirl and bring her back in time for episode 3, but when the episode actually aired, it turned out the CW had just planned to bump her on the head and send her on her merry way.

More like this
Entertainment
6.16.2022 11:30 AM
30 years ago, Tim Burton made the sexiest and most sinister superhero movie
By Mónica Marie Zorrilla
Entertainment
6.14.2022 4:50 PM
A Joker 2 musical would actually be great — here’s why
By Dais Johnston
Entertainment
6.24.2022 11:15 AM
Behind the scenes at “Herogasm,” The Boys’ most NSFW episode ever
By Aaron Pruner and Jake Kleinman
Share: