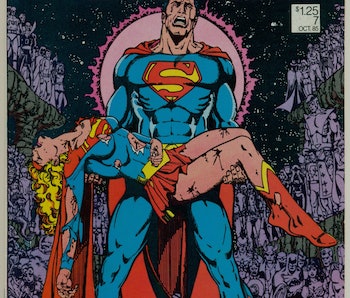 What in blazes is even happening here in the promo for the second episode of CW’s Supergirl?!

In a new poster teased on Supergirl’s official Twitter account, Melissa Benoist’s Supergirl and Tyler Hoechlin’s Superman recreate the infamous cover for DC’s “Crisis on Infinite Earths” #7 where Supergirl saves Superman from the multiverse villain, Anti-Monitor. Despite managing to save her cousin, Anti-Monitor brutally attacks Supergirl, killing her. Distraught, Superman holds a funeral for her back at the Fortress of Solitude.

So it begs the questions: What the hell?

Is this the episode where CW’s Supergirl becomes CW’s Superman? Probably not. Instead, the synopsis for the episode reveals that CADMUS attacks National City using a kryptonite-powered villain who seriously injures Supergirl, sparking the ire of Superman against the DEO where the kryptonite was stolen from. While the damage might ultimately end up being just a flesh wound, the poster ups the ante by referencing the literal death of Supergirl.

It can’t be that bad on the show though, Superman isn’t even crying like his comic book counterpart.

While this probably isn’t the end of Supergirl on her own show, this is certainly a dramatic way to promote the episode, and the stakes do sound high enough for the reference to be warranted.

Hopefully there will be a Supergirl for years to come, even after this encounter with CADMUS’s new villain.