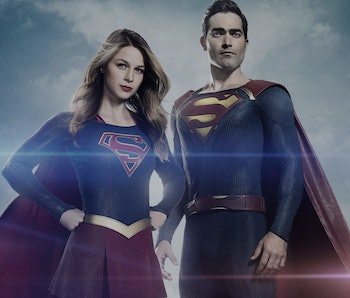 It’s been authoritatively documented that Superman is, well, a dick. Generally speaking, unless the writing is really bad, Superman’s dickishness isn’t intentional but rather the inadvertent result of trying to navigate a world in which he is always ridiculously overpowered. And that doesn’t always just mean Superman being careful with his powers — sometimes, it’s the fact that he couldn’t show up at all, lest he totally upset a story’s dramatic balance, that creates problems down the road.

Take the second, CW-bound season of Supergirl, which will see the debut of Teen Wolf’s Tyler Hoechlin as Kara’s cousin. The Man of Steel wasn’t allowed to appear on the first, CBS-set season, except in the tiniest of cameos, in part to avoid confusion with Henry Cavill’s big-screen version of the character. But now Superman is set to take his place on the show as an ongoing presence, and Supergirl executive producer Andrew Kreisberg admits the characters can’t just ignore this massive change in status quo, even if it is fundamentally driven by out-of-universe business reasons that they couldn’t even begin to comprehend.

Supergirl executive producer Andrew Kreisberg addressed one aspect of Superman’s lengthy absence with EW. After all, Kal-El might be Kara’s biological family, but it’s Alex Danvers who has actually been there for her while Superman was out of the picture, and his return isn’t going to magically erase her from the picture:

“Alex has been everything to Kara; she’s her family. Alex has a little bit of a chip on her shoulder about Clark. She loves him and he’s family, but he left Kara on their doorstep. Kara is so excited to see Clark and so excited to be with him, it’s almost a little bit like Alex feels taken for granted, because she’s the family member who’s put in the time. It sets up an interesting conflict between her and Kara in the first couple of episodes.”

As always, it doesn’t matter that Superman is trying to do right by his family. He’s still, now and for all time, a bit of a dick. Such is the curse of Krypton.