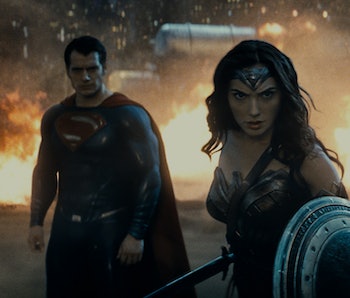 There has never been a more polarizing movie in the superhero era than Batman v Superman: Dawn of Justice. Zack Snyder’s dour examination of the most iconic superheroes from DC was lambasted for its dark tone, convoluted plotting, and joyless characterization after its release in March. Wonder Woman was pretty cool, though.

Directed by Snyder, previously of Watchmen and Sucker Punch, an extended cut of Dawn of Justice is now available on digital with physical releases coming July 19. With 30 minutes of extra footage and an R-rating by the MPAA (the theatrical version was a hard PG-13), it is curious; is more movie a solution to the film’s unfulfilling experience. What can a so-called “Ultimate Edition” accomplish?

Apparently quite a bit, according to some reviews.

Scott Mendelson of Forbes did not think highly of Dawn of Justice during its theatrical release, but finds the new cut “a genuinely superior movie” that balances the Batman/Superman dynamic better than the theatrical version. “[H]owever ‘inappropriate’ it may be that an R-rated Superman movie even exists, this version shows that there was a version of Batman v Superman that made basic coherent sense and somewhat worked as a stand-alone feature film on its own complicated terms.”

On Flickering Myth, Anghus Houvouras — who enjoyed Dawn of Justice — praises the Ultimate Edition’s stronger opening and better developed Clark Kent, but still criticized its oblique “Knightmare” scenes and comical “Martha” coincidence-as-resolution. “If your problem was the direction of the franchise, you’re still going to suffer through these three hours.”

Russ Burlingame of ComicBook, who also enjoyed Dawn of Justice, notes that however beneficial its changes, the Ultimate Edition will not singlehandedly change minds. “[T]he movie is still fundamentally the same film, and the fact that Snyder’s direction, the tone, and the film’s handling of Superman are such controversial elements that it seems unlikely a little clarity will drastically alter the perceptions of people who are emotionally invested in disliking the film.”

Meanwhile, in a half-hour long episode of Collider Talk, a roundtable featuring The Death of Superman Lives director Jon Schnepp, Dennis Tzeng, Steve Weintraub, and Heroic Hollywood founder Umberto Gonzalez — many of whom strongly disliked Dawn of Justice — was a chorus of generally high-praise for the Ultimate Edition.

In the show, Schnepp says he was “blown away” by the Ultimate Edition. “Though it’s longer, it actually makes more sense and feels shorter. Everything about it feels better.”

“I think this movie is so much better,” echoes Weintraub. “It’s not a perfect movie, it clearly has some issues, but it’s so much better in the first two acts. It’s like night and day.” Tzeng was less impressed, but adds that the Ultimate Edition “flows better” with fewer abrupt cuts.

Batman v Superman: Dawn of Justice is now available on digital and will release on Blu-ray and DVD July 19.