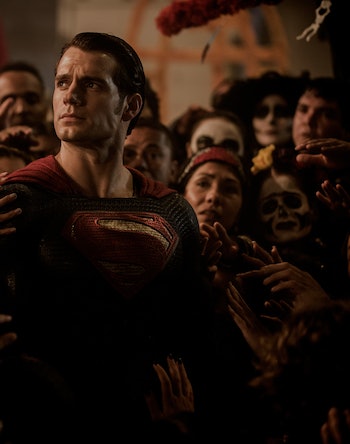 Despite abysmal reviews for Zack Snyder’s Batman v Superman: Dawn of Justice, the movie broke box-office records and made over $400 million its opening Easter weekend, ensuring the DC superhero cinematic universe will live forever. Or at least until next year, when Justice League — Part 1 releases on November 2017.

Even as a longtime DC fan, I didn’t enjoy Dawn of Justice. I should never have to look at my watch in a movie where The Flash time-travels to warn Bruce Wayne about Darkseid. Or, you know, where Superman fights Batman. In spite of its flaws, there were some great moments that not only pleased the DC die-hard in me, but a moviegoer hoping his $17 (IMAX) were well spent.

Here are five great moments in Dawn of Justice that made those 17 bucks pretty worth it after all.

The cross of Dawn of Justice and 2013’s Man of Steel is one of the film’s highest points. Despite exploitative 9/11 imagery and Fast & Furious-style editing, there’s terror in seeing the destruction from a few miles away. You’re far enough to be safe, close enough to see the horror. Even if it’s kind of a Jeep commercial, the opening to Dawn of Justice started so, so strong. If only it kept that momentum going.

The chemistry between Jeremy Irons and Ben Affleck.

It’s funny: in the beginning, the worst thing producers did was cast Ben Affleck as Batman, but he ended up being one of the best things about it. By a wide, wide margin.

But what makes Affleck’s portrayal worthy was his chemistry with Jeremy Irons, who played Alfred Pennyworth, Bruce’s faithful butler and, in more subtle ways, mentor and conscience. Irons is a different Alfred than we’ve ever seen, even in comics. He’s sexier, less stuffy, snarky but not a jerk, and someone you believe was totally MI5 before he made hangover breakfast for Brucey.

Michael Gough and Michael Caine brought warmth to their Alfreds, and Sean Pertwee has carved a niche with his in Gotham. But I can’t wait to see more of Irons and Affleck, who fed off each other so richly. They had the best scenes in the whole movie.

Batman’s fight that was right out of ‘the Arkham Asylum video game.

It took 77 years, staring with Lewis Wilson wearing the cape and cowl, but Batman finally came to life on screen.

When Batman rescues Martha Kent (Martha? MARTHA!), he clears out Luthor’s henchman with such calculated ferocity that only true Batman fans knows he’s capable of achieving. It looked like we were watching the Batman: Arkham Asylum video games, which were (read: are) the Batman games of all time.

Even in his definitively modern trilogy, Christopher Nolan didn’t unleash Batman in the way fans have always known the Dark Knight. Tim Burton barely let Batman kick a dude and Nolan made him a stealthy boxer despite his actual ninja training. But in Snyder’s Dawn of Justice, Batman was the savage beast he’s always meant to be, using all his tools in his utility belt to get rid of Gotham’s scum. It was awesome.

“Is She With You?” or, the introduction of Wonder Woman.

At a screening I attended, Gal Gadot’s drop-in as Wonder Woman generated hearty applause and cheers from the audience. Not Batman and Superman fighting. Not Batman’s Batmobile chase. Not Superman meeting Batman for the first time, which was so poorly framed. It was Wonder Woman.

And I’ll be damned if this music isn’t awesome:

“If You Seek His Monument Look Around You”

When the first teaser trailer showed a frightening, gigantic idol of Superman defaced with “False God” I worried if Dawn of Justice was ill conceived from the start. Watching the film only confirmed my suspicions, from how it talks about gods yet fails to really make Superman a worthy figure of reverence.

But then, over the shattered monument in Metropolis following the Doomsday battle that ended with Superman’s death (or “death”), something tugged at me even when I was so frustrated with the film: Had there been tighter direction and better storytelling, those words on the memorial could have brought me to tears:

“If you seek his monument, look around you.”

God damn, that’s powerful. I wanted to cry. I didn’t, because I was more mad about the film’s shortcomings, but for an all-too-brief moment I really believed in the story the film tried to tell. Maybe one day, perhaps I will.