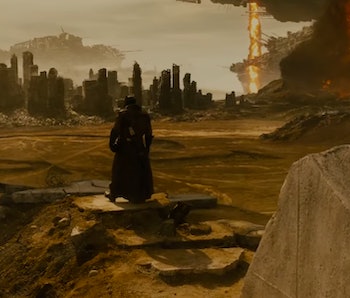 Even if Batman v Superman: Dawn of Justice is an overproduced train wreck adapted from Zack Snyder’s angsty, high school English lit essay, it shouldn’t discourage DC Comics. Snyder isn’t directing all the forthcoming superhero films, which is good, though he is on Justice League, so maybe we should panic.

In Dawn of Justice studio Warner Bros. prioritizes the franchise over sensible filmmaking. But the ludicrous and out-of-place desert “Knightmare” scenes was, in fact, not that out of place at all. Sure it’s bad, but it has a purpose.

A buffer between the first and second acts, the “Knightmare” begins when Batman/Bruce Wayne (Ben Affleck) awaits an encryption running at the speed of dial-up. Maybe he popped a Xanax, because Wayne immediately begins to dream he’s a warlord in a desert apocalypse.

Both Batman and Superman are leaders of opposing sides, each with his own army for some reason. Betrayed by his own men, Batman is completely outnumbered over a devastated … uh, Gotham? Metropolis? (Neither city has a discernable identity in the film).

The devastated city is branded with the Omega symbol, which means something else to comic book fans. For non-theologists, the Omega symbol is the signature of DC super villain Darkseid, and marks those vulnerable to his influence.

We never see Darkseid, but we do get a vivid look at the flying Parademons, winged shock troopers that do Darkseid’s bidding. None of Batman’s or Superman’s soldiers appear fazed by hordes of beefy Wattos, so this is definitely an apocalypse where alien horrors are as normal as walks in the park (if there are any parks left).

The “Knightmare” ends with the scenes everyone saw in the original trailer, in which Superman unmasks Batman. He also rips out Bruce’s heart Temple of Doom style. That’s when Bruce wakes up.

Back at the Batcave, Bruce wakes up to a guy in red armor with a visible yellow bolt on his chest, trying to talk over a really loud CGI time portal. Yeah, it’s The Flash, the first of two cameos Ezra Miller has as Barry Allen in the movie. Zack Snyder explained this appearance in an interview with Entertainment Weekly, describing him as a “giant Easter egg.”

In this totally unsubtle scene, Flash has hopped through a portal to deliver a message warning Bruce that “he was right about him” but disappears before he can explain further. Bruce wakes up (again) to see his encryption complete.

And because Dawn of Justice is trying too hard to set up the Justice League films, none of this is mentioned or clarified. Later in the movie, Wonder Woman finds Lex Luthor’s computer files on Aquaman, Cyborg, and The Flash, but the whole “Knightmare” could have been cut and the film would have held up fine.

Flash’s cameo in Dawn of Justice recalls The Flash’s regular dimension-hopping that his super speed allows. He does it a lot, like in CW gem The Flash and the 2011 comic book series Flashpoint, which was adapted into an animated movie Justice League: The Flashpoint Paradox.

And while it’s not quite the same, Barry Allen does finish his journey in Flashpoint with a message to Bruce from his deceased father, Thomas Wayne. Bruce remarks to him, “You are one hell of a messenger.”

What is meant to elaborately and abstractly preview the two-part Justice League movies is misinterpreted by Batman as a calling to destroy Superman. But it sets up Darkseid, at least?