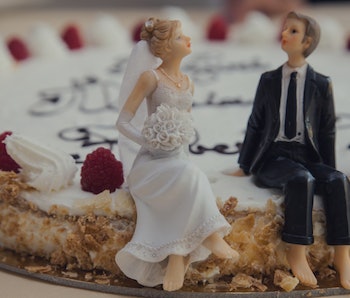 It looks like many people have taken Wham!’s “Last Christmas” to heart and are thinking of making this holiday the last they’ll spend with their significant other. According to Google Trends, the number of people turning to the internet for relationship-ending advice is currently surging.

Despite what Love Actually and New Year’s kisses might have you believe, increased interest in breaking up post-Christmas is not uncommon. It’s been an ongoing trend: A 2010 study that crunched Facebook data found that people break up most frequently during the month of March, followed by the period between Christmas and New Year’s. A 2007 survey conducted by Yahoo! determined that people are twice as likely to break up between Christmas and Valentine’s Day compared to other parts of the year.

There’s so much breaking up after the holidays that the first Monday in January is known as “Divorce Monday.” In 2015, legal firm Irwin Mitchell said its surveys demonstrated that one in five couples in the United Kingdom planned on divorcing after the holidays. Comparatively, 2015 survey data from the law firm Co-Op Legal Services revealed that there is a 332 percent rise in divorce inquiries in January compared to the four months preceding.

“The surge happens on Divorce Monday,” James McLaren, president of the American Academy of Matrimonial Lawyers, told MarketWatch. “The number of filings is one-third more than normal. That begins in January and probably goes into early March.”

Why so many breakups after Christmas? Experts believe it’s because the holiday season can be a make-it-or-break-it trial for many couples.

For couples on the edge of the decision, breaking up before Christmas may feel more stressful than actually dealing with the breakup itself. Their emotions may also be amplified by the season’s sentimentality. People adapt to hedonic experiences (like a relationship), which ultimately makes positive experiences less enjoyable. But studies demonstrate that objects and experiences that have high sentimental value can act as a buffer against that adaptation.

However, the stress of the holidays — together with the discovery that a partner either can’t help with that stress or exacerbates it — can ultimately demonstrate to a couple that it’s time to call it quits. And while the desire to split could be immediate, people know law offices aren’t open until after the new year.