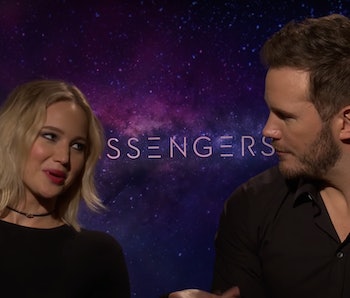 It’s going to be quite a while before the technology behind Chris Pratt and Jennifer Lawrence’s new movie, Passengers, becomes a reality. But even though placing a ship full of people in cryogenic slumber for a century-long deep space voyage is the stuff of fantasy right now, the film’s stars have some serious space questions.

Well, they’re not that serious.

NASA shared a video on Wednesday of a little Q&A session between NASA scientist Tiffany Kataria and Pratt, Lawrence, and co-star Michael Sheen. The questions — and answers — aren’t exactly hardball stuff (though Sheen seems genuinely interesting in having a chat about science). No, for the most part, Lawrence and especially Pratt are just playing around.

“What do you feel about the term ‘A Wrinkle in Time?’” Lawrence asked, shouting out the beloved book.

“I think it’s an accurate one,” Kataria responded. “Astrophysicists are thinking about multiple dimensions and how that sort of folds into the fabric of time.”

Pratt, after asking a question about breakthroughs in space travel technology, came at Kataria with a very strange theory about the sun. “Is there any possibility that every star we’re looking at is, in fact our Sun — the Sun around which our, you know, the center of our solar system — just compounded upon itself over and over again in various states of existence?”

With a laugh, Kataria began to explain how that’s all nonsense, but Pratt, with a roguish smile, interrupted her. “Wrong! It is.”

Sheen, meanwhile, actually asked some pretty interesting questions. “What are we most likely to become extinct by? Becoming too close to the sun, or a singularity?”

Kataria said either result was possible, but likely “a billion years off,” but Sheen said we should start preparing now either way.

Passengers is out in theaters now. Reviews have not been great.

More like this
Science
5.9.2022 8:30 PM
Crew-3 Splashdown: Watch SpaceX’s Crew Dragon Endurance splash into the Gulf of Mexico
By Jennifer Walter
Entertainment
5.16.2022 1:56 PM
For All Mankind Season 3 release date, trailer, cast, plot for the Apple TV+ sci-fi series
By Ryan Britt
Culture
5.9.2022 1:30 PM
Exclusive: 'Everything Everywhere All At Once' comic opens up the multiverse
By Isaac Feldberg
Related Tags
Share: