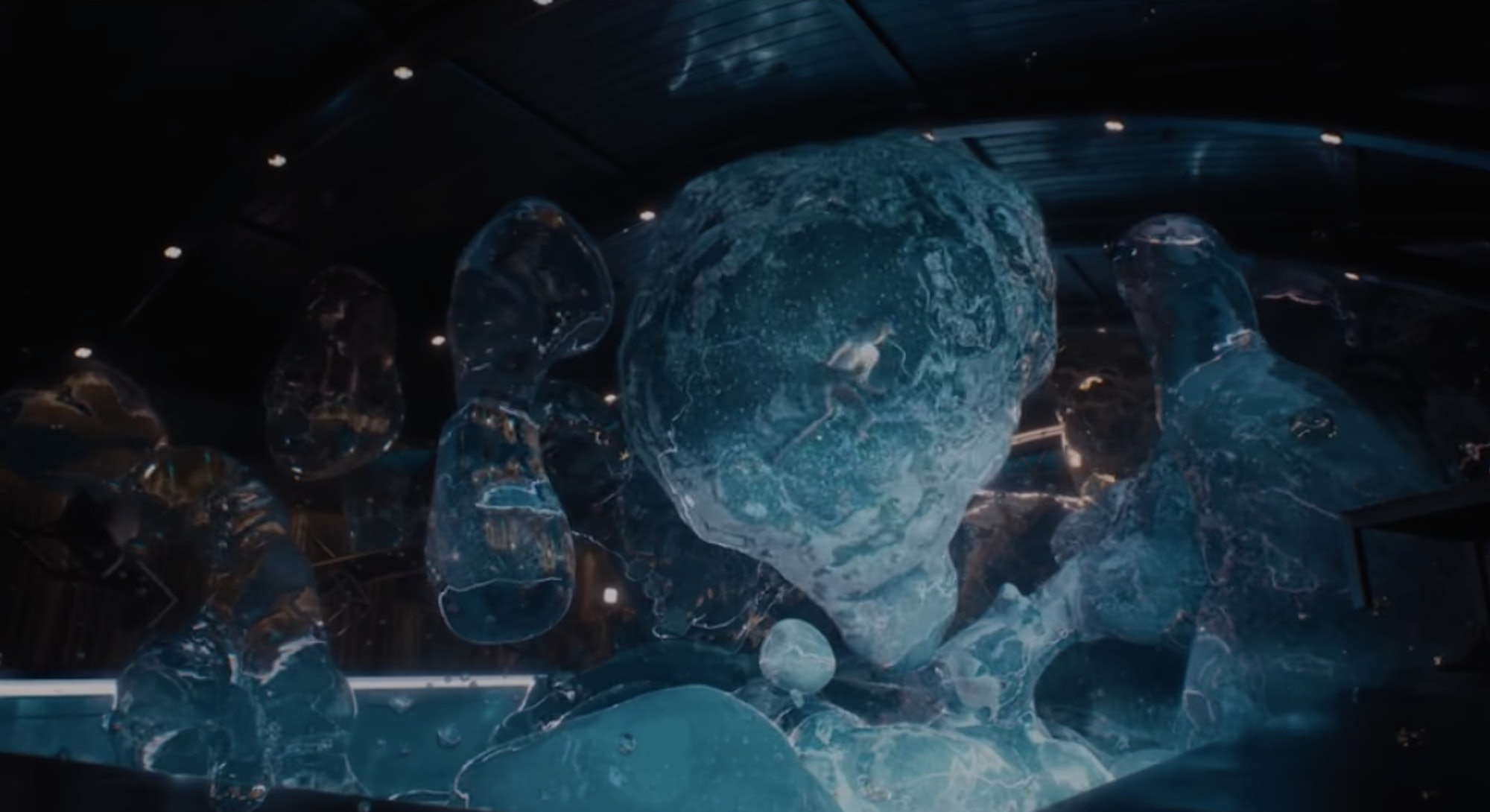 When Morten Tyldum inherited the well-traveled Passengers script, he decided that instead of making a science fiction movie, he’d be making a character drama. Ironically, that meant building out a gigantic set in Atlanta’s Pinewood Studios instead of relying on advanced computer graphics. In order to avoid going full science fiction, Tyldum had to build a spaceship.

“This is about characters, and I wanted them to be able to perform,” Tyldum told Inverse. “Acting is reacting to your surroundings and to your fellow actors, and if you put somebody in the green room and they have to use a green screen, and you think you can get that special performance — it’s not happening.”

There was no better example of this than the physicality demanded by one of the film’s most pivotal scenes. Jennifer Lawrence, playing journalist Aurora Lane, is one of only two people awake aboard the massive Starship Avalon, and kills time hanging out at a large, luxurious pool that looks out onto the stars. She’s swimming laps when the ship’s gravity machine loses power, trapping her inside a gigantic wave of rising pool water, an airless and impenetrable bubble. It’s a terrifying sequence, enough to cause an audience member to hold his or her breath, which is exactly what Lawrence had to do during shooting.

Yes, they strapped down the world’s most bankable actress inside a water tank. And she was game for it.

“Before we shot, she goes up and breathes, and she’ll hold her breath,” the director explained, recalling the high-stakes shoot. “Then there are two stunt men inside with ropes that tied around her belt and the base. And they drag her down, and anchor the ropes to the bottom of the tank. Then she’s held in one place. Then she panics and tries to get up, and she can’t move. That was an exhausting and kind of frightening thing to do, and she really went for it.”

Screenwriter Jon Spaihts’s script is mostly set on the Avalon, which functions as a space-age Titanic; the Homestead Company ship shuttles immigrants to a new planet, offering the finest and most opulent amenities (at least to the passengers who can afford them) along the way. Aesthetically, the ship is a mix of the USS Enterprise and a Four Seasons with some unexpected inspiration from a notorious prison thrown in.

“On the boats to Alcatraz, there’s an antenna that spins around itself,” Tyldum said. “Our production designer Guy Dyas took a picture of that, and said, ‘Wouldn’t that be a cool design for the spaceship?’ So it’s actually the base of the antenna, of the boats that go to Alcatraz, that inspired the design.”

Spaihts initially envisioned a more “standard” rocket-powered luxury liner, and that Tyldum and Dyas’s decision to turn it into a gigantic rotating helix made producing practical sets an even bigger challenge. The Avalon’s many interior nooks — from living quarters to engine rooms and a crew bridge — were constructed at Pinewood, which had to undergo some extreme remodeling to facilitate the sets.

“Our biggest build, we couldn’t fit into the biggest studio there, so we had to tear down the wall and build it into the next studio, Tyldum said, noting that the grand concourse of the ship’s gigantic Guggenheim-style ramp made for perfect jogging paths. “It was so immense, but it helps so much. You could actually feel the solitude and the isolation when you walked through these enormous sets.”

The grand concourse set had over eight miles of LED lights strung throughout, Tyldum revealed, which gave them complete control over the mood of the massive ship. Chris Pratt, as engineer Jim Preston, spends most of the first half-hour of the film wandering the Avalon alone, discovering its various luxuries and inner-workings. The film was originally supposed to be set 600 years in the future — it’ll take a while to find and colonize new planets — but Tyldum says he threw that number out for the sake of flexibility. Eliminating traditional sci-fi genre tropes allowed them to better embrace the interior designs described in Spaihts’s script, combining futuristic tech with art deco and other styles.

“The ship in my mind very much took up cues from a luxury cruiseliner in the present day,” Spaiht explains. “I wanted to combine sleek high-tech aesthetics with indicators of luxury, like carpet and mahogany handrails. There are the broad public spaces, which are very sleek and modern and styled in the aesthetic of the Homestead company. There are nostalgic specialty spots, like restaurants and bar that evoke historical epochs on Earth. Then there are the utilitarian spaces where the crew works that are much more industrial and functional.”

One of the most prominent and utilized settings is the large, open bar area, which embodies the wide range of influences. Its art deco design gives it an old-world New York feel, which juxtaposes well with the well-groomed robot pouring the drinks. Michael Sheen’s Arthur, a cyborg bartender who offers up pre-programmed words of wisdom, zips around on a single wheel. All of his movements — both smooth and spastic — were done on set, without CGI. “None of that was visual effects,” Tyldum said. “It was done with a rigging system that pushed Michael back and forth.”

Even the CGI in the film was used to supplement practical sets and stunts. It’d have been easy to animate the spacewalks, but instead, Tyldum demanded that Lawrence and Pratt be strung up and pushed all over the set, simulating the zero gravity and physical strain it causes anyone trying to navigate all dead air (or lack thereof).

“I wanted to create impact, and to have them in space suits on wires outside and actually perform — in space suits,” Tyldum said. “And it was really, really hard.”