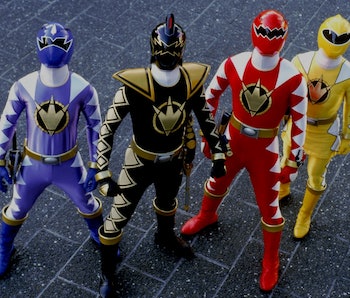 Among the dozen-ish superhero movies set for 2017, only one is engineered to cash in on millennial nostalgia: Power Rangers. Directed by Dean Israelite, the film will rework the camp classic TV show from 1993 for a modern audience, but it won’t be the first time the Power Rangers have been “rebooted.” Although it wasn’t a traditional reboot that started from scratch, 2004’s Power Rangers Dino Thunder borrowed many of the same elements from the original Mighty Morphin Power Rangers, tailoring the franchise to the 21st century. What resulted is one of the best single seasons of the show’s long, 20-plus year history.

Granted, 2004 is already a pretty dated era: hoop earrings, the Bush presidency, and Kanye’s The College Dropout marked the period, and, subsequently, Dino Thunder. The world immediately after 9/11 saw superheroes rise into blockbuster phenoms, when Sam Raimi’s Spider-Man opened the floodgates for comic books to become modern movie spectaculars. But the Power Rangers — owned by Walt Disney after a 2001 buyout — never had the room to mature with their aging audience. Nevertheless, the Power Rangers went the YA route when veteran producer Douglas Sloan returned as showrunner in 2003, turning the superheroes back into teenagers with some attitude. (For a few seasons, the Power Rangers were adults with jobs. Their personal lives were boring as hell.)

In Power Rangers DinoThunder, one fateful afternoon leads a group of three disparate Reefside High students — soccer jock Connor (James Napier), hipster Kira (Emma Lahana), and gamer/hacker Ethan (Kevin Duhaney) — to detention with their boring science teacher: Dr. Tommy Oliver (Jason David Frank), an archaeologist whom they have no idea was the legendary Green/White Ranger. When the teens stumble into Tommy’s lair, they’re chosen as the newest generation of Power Rangers with “Dr. O” as their mentor. Eventually, Dr. O returns to superhero life as the new Black Ranger, joining them when needed.

Like Mighty Morphin, Dino Thunder tossed together an ensemble of polarized, archetypal personalities. Unlike Mighty Morphin, they felt real. The teens didn’t get along and actually hated each other at first. What does a jock like Connor have in common with a “blerd” (black nerd) like Ethan? How many more of Connor’s chauvinist comments will tip Kira to throw him down a cliff? In the show’s two-part premiere “Day of the Dino” (an homage to 1993’s “Day of the Dumpster”), the trio bicker and barely stand being in close proximity. This dynamic was a huge departure from previous years where the Power Rangers were already BFFs and formed tight bonds after a brief 22 minutes. The Reefside teens inevitably gel, but their bond is earned, making the Dino Thunder Rangers more authentic than any generation before or since.

Dino Thunder is exactly what nostalgic millennials think Mighty Morphin was. Cheesy? Yes. A bit stupid? Sure. But what “‘90s kids” don’t remember is how much Mighty Morphin failed its characters when it didn’t explore what teenagers think, feel, or want. While Dino Thunder still doesn’t tackle real problems real teens deal with, it did a much better job than its 1993 predecessor.

Take its bullies, another hallmark from Mighty Morphin. Like Bulk and Skull, mean girl Cassidy (Katrina Devine) and her sidekick Devin (Tom Hern) spend most of the series giving the heroes a hard time. But their relationships reach a conclusion instead of Bulk and Skull’s dissolve into irrelevance. In the finale, Cassidy — aspiring to be a broadcast journalist — arrives at a crossroads when she gets evidence of the Power Rangers’ secret identities. She’s tempted to break the story of the century, but in the end she willingly gives it to the Rangers. Her reasons are standard fare for children’s TV — it’d be unfair to improve her life by ruining theirs — but if one were to retrace small, revealing moments from throughout the show, Cassidy’s change of heart makes sense. This is basic structure for any other TV show, but for the seemingly low rent Power Rangers this is worthy of an Emmy.

Dino Thunder also explores territory Mighty Morphin never did. In the complicated lives of teenaged superheroes, paths cross when Principal Randall (Miriama Smith) reveals herself as the evil Mesogog’s number two … during school hours. In the episode “House of Cards,” Randall fights Dr. O and transforms in public, descending Reefside High into chaos. Rita and Zedd never attacked Angel Grove High even when they knew the actual identities of the Rangers. In Dino Thunder, Mesogog and his circle knew but were careful and calculated in their schemes, and never caused careless destruction for plot.

Years before cinematic universes were the dominant form of narrative TV, Dino Thunder built upon its long history when it introduced a new evil White Ranger. He’s revealed to be a new kid in school, Trent (Jeffrey Parazzo), and his presence haunts Dr. O who began his superhero career in exactly the same way. In Trent’s own meta-textual arc to become a comic book artist, his own position as a supervillain, and Dr. O as a veteran superhero who sees himself in the new Johnny-come-lately, suddenly the cheesy Mighty Morphin Power Rangers means more as it resonates 12 seasons later.

While Dino Thunder was never transcendent, it worked on its own terms and is still solid. It never postures and keeps the camp that is authentically Power Rangers and with pride. But it’s also aware its audience was growing up in a modern world: Ethan was the first “gamer” to become a Power Ranger, while Kira’s singer persona was cut directly from the Avril Lavigne/Ashlee Simpson zeitgeist of the mid-2000s. (Lahana was also pursuing a singing career during her time on the show, and in several episodes she performs original music.)

It was also the first to appeal to obsessive fandom: The novelty of Tommy Oliver’s return never wears off, and several episodes — such as “Legacy of Power” and “Lost and Found in Translation” — celebrate the show for nostalgic fans and giving new ones a crash course in its own history.

One episode in particular stands out. Due to Frank’s martial arts schools in the U.S. (the show filmed in New Zealand), Frank spent a few episodes away, leading to a bizarre arc with Tommy stuck in his costume. It’s absurd and unintentionally hilarious, but the arc climaxes in what is one of the show’s best episodes of all time. “Fighting Spirit” homages the franchise’s most popular characters when Tommy’s old identities return from the void to challenge his worth of being a Ranger again.

Dino Thunder isn’t prestige TV, but in an era of reboots, Power Rangers got the concept right without alienating any of its audience 13 years ago. Although it didn’t nuke continuity and start all over, it mined the same elements that made the classic series iconic and reinterpreted them without losing the cheese that made kids love it in the first place.

Israelite’s Power Rangers is a true reboot with a tone profoundly influenced by Marvel, DC, and YA franchises like Twilight and The Hunger Games. That’s fine, because it will be the most refreshing image the Power Rangers has had in more than 20 years. But back in 2004, there was a more authentic alternative.

More like this
Entertainment
5.11.2022 10:30 AM
Kevin Feige wants you to forget Ms. Marvel is Inhuman in the MCU
By Eric Francisco
Entertainment
5.10.2022 10:00 AM
Doctor Strange 2 just quietly fixed the most annoying part of WandaVision
By Dais Johnston
Entertainment
5.13.2022 10:30 AM
Moon Knight almost assembled Marvel's next huge team-up, writer reveals
By Mónica Marie Zorrilla
Related Tags
Share: