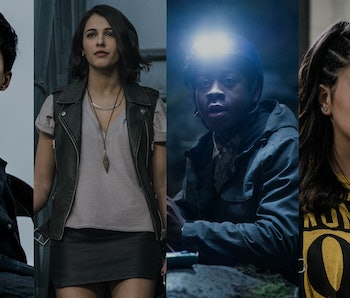 In the new Power Rangers movie coming next March from director Dean Israelite, the heroic teenagers with attitude have turned into complicated, misbehaving rebels.

The in-universe Angel Grove High School blog, run by Lionsgate, new articles have revealed Zack (Ludi Lin) has the record for “worst attendance,” while brainy Billy (RJ Cyler), fresh from detention, stood up to a bully by punching him. Billy’s moment of defiance was seen in the film’s trailer, after Billy and the others obtain the mystical Power Coins.

It’s not just Zack and Billy acting unlike their 1993 counterparts. On Halloween, an in-universe article about Jason Scott (Darce Montgomery) gave insight to the accident — a “prank gone wrong” — that resulted in his suspension from the football team. Meanwhile, Kimberly (Naomi Scott) is a dethroned “cheer royalty”. Trini (Becky G) is socially invisible, unable to shake her “new student” image even after she’s been at Angel Grove for a year.

In the 1993 TV show, the Power Rangers were model students with exceptional grades and respect from their peers and school faculty. It was a sanitized image of real teenagers, and now in the new film from Lionsgate, they have been updated into flawed and relatable characters.

The Angel Grove High blog as a whole is giving a definitive timeline to the events in Power Rangers. Popping up around September, the website has periodically updated with articles about Angel Grove High student life and current events in the town; an explosion at a mine has been a nuisance, and in the film’s trailer, the explosion was caused by the rebellious teens who are destined to become superheroes.