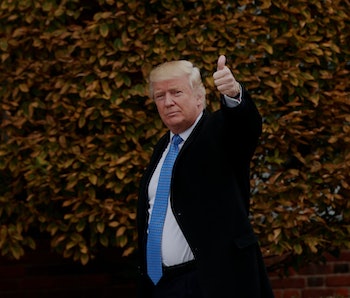 Most people know that climate change is a very real threat to the planet. As for President-elect Donald Trump, not so much. In fact, it appears to be difficult for Trump to actually stick to a narrative regarding climate change. Like so many of his policies and positions, Trump’s views on the matter change with the tides — or his mood, or whatever is economically or politically expedient to say at a given moment. In large part, Trump does appear hostile to the notion of acknowledging the realities of climate change, as evidenced by recent administrative appointments like his new head of the EPA, Scott Pruitt. But there have been moments throughout his short political career when Trump has shifted his rhetoric on the issue.

It’s tough to pin down where Trump really stands. But let’s take a look at some of Trump’s various turning points when it comes to his views on climate change.

In 2012, Trump claimed to have the inside scoop on climate change. He revealed in a tweet that climate change was actually a hoax generated by China “in order to make U.S. manufacturing non-competitive.” This insight was his first major foray into the issue. It’s an aggressive stance that he’s yet to top.

It was followed up by other tweets over the next couple of years.

Jump forward to 2016, to the middle of Trump’s presidential campaign, and suddenly his tune began to change. But it wasn’t a change designed to please voters — no, they’re perfectly fine with his rampant science denial. The change had to do with Trump International Golf Links & Hotel Ireland, in County Clare, Ireland. It’s (as the inevitably attached Trump name suggests) a golf course owned by Trump. In May, Trump filed for permission to construct a sea wall to protect the course from “global warming and its effects.” Seems like Trump was willing to take that Chinese hoax more seriously when it was going to ruin his golf course.

I Never Said That

The next notable moment came during the New York presidential debate between Trump and Hillary Clinton. During the debate, Trump flat out denied he ever said that global warming was a Chinese hoax. It was a baldfaced lie that he never bothered to walk back. It left his surrogates scrambling after the debate to explain what his campaign’s position on climate change was — probably because they didn’t know themselves.

Trump was elected president on November 8, leaving many people wondering how the incoming Trump administration would handle the issue of climate change — if they address it at all. To that end, it was strange, but possibly welcome news when Ivanka Trump announced that she would be making climate change one of her “signature issues.” It’s unclear what she meant by this, whether it will be a genuine effort on her part or merely a branding stunt. Still, if Ivanka was serious about taking on the issue, there’s no telling what influence she could wield (or maybe has already exerted) over her father.

Coming just a few weeks after Ivanka’s announcement, Trump sat down for an interview with Fox News host Chris Wallace. During the interview, Wallace asked Trump questions relating to climate change and President Obama’s legacy. Trump at one point said that “nobody really knows” if climate change is real, which is a marked departure from the aggressive certitude he expressed not so long ago. He also said that he’s currently “studying” the idea that the U.S. should depart from the Paris Agreement, something experts have said would be difficult and damaging. But this could be a good sign. In the past, Trump has weakened his stances on a number of issues, like Obamacare, after learning more about them.

Finally, it was revealed Wednesday that Elon Musk, along with a host of other tech leaders, will join the President’s Strategic and Policy Forum, a group with whom Trump will occasionally consult when making economic decisions.

Tesla Motors CEO Musk is an outspoken advocate for climate change action. That the president-elect is willing to hear advice from Musk, someone toward whom Trump’s rhetoric would indicate he’d be unfriendly, is a sign of two things. The first is that Trump is a true plutocrat, and believes that the mere possession of wealth is an acceptable prerequisite for public service. Musk has clearly seen the opportunity here. The second is that Trump can possibly be influenced on the matter of climate change. It certainly wouldn’t be unlike him to do a complete 180 on a particular issue.

Here’s hoping that Musk can get the job done.