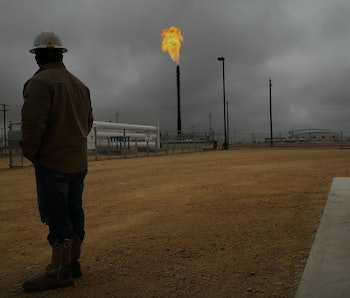 With the election of Donald Trump, there is perhaps no government agency with a more uncertain future than the United States Environmental Protection Agency (EPA). Trump in the past has gone so far as to say that climate change is a hoax propagated by the Chinese. Whether Trump meant that statement literally, or it was simply hyperbolic campaign rhetoric, it’s clear that the Trump administration has no plans to become all buddy-buddy with the EPA.

Further evidence of this can be found on the shortlist of candidates that the Trump administration is said to be mulling over for head of the EPA. None of them are friendly towards the agency’s purpose and recent direction under President Obama. Kathleen White doesn’t believe the EPA should regulate fossil fuel emissions. Scott Pruitt sued the agency over the same sets of regulations. Jeff Holmstead, who served at the EPA under the Bush administration, has, between then and now, been a lobbyist for energy companies. Donald Van der Vaart, the unlikeliest candidate on the shortlist, has been a frequent critic of Obama’s environmental policy as the environmental regulator of North Carolina. Finally, Myron Ebell is known for being a massive climate change skeptic. Along the same lines, the likely pick for Trump’s Energy Secretary, Harold Hamm, is the billionaire owner of Continental Resources, an oil and gas company.

No matter who Trump winds up picking, the future of the EPA is looking rather smoggy. But there’s still some hope. It turns out that, despite his threats to do so during his campaign, for Trump to dismantle the EPA altogether would be a legal near-impossibility. It would require changing or repealing all American environmental laws — and there are a ton. Some of the major ones, like the Clean Water and Air Acts, date back to the 1970s, when President Richard Nixon (a Republican) first founded the agency. The scale of the work alone is enough to prevent anyone from ditching the EPA wholesale, let alone the true costs of doing so.

But that won’t stop Trump, and whoever he picks to lead the EPA, from hamstringing it and the legacy of its current head, Gina McCarthy. And he might not even need Congress for that. While the president can’t make laws himself, he can exert a pretty significant degree of control over how (and to what extent) certain laws are enforced. Among them are regulatory laws like those governing the EPA. He can do things like roll back Obama’s Clean Power Plan, which provides new sets of regulations for the EPA, as well as infrastructures for the agency to support states with their own environmental initiatives. If Trump is serious about taking out his ire for government spending on the EPA, that would be a logical place for him to start.

The EPA finds itself in the odd situation of being under attack, but virtually indestructible. It may see itself declawed and reigned in for the next four to eight years, existing on the books, but not really doing much as its administrators sit on their hands. It may no longer have the authority or resources to closely police the emissions or waste dumping of factories and power plants. The dedicated, environmentally-conscious employees of the EPA will be in for some waiting. But the good news is, when Trump’s administration ends, the EPA will still be here, eagerly awaiting reactivation.