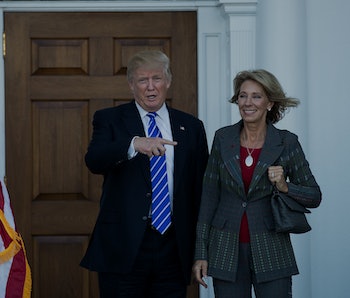 Throughout his presidential campaign, Donald Trump promised up and down that he would “drain the swamp.” In an October press release and his speeches, Trump expressed his desire to “break the cycle of corruption” and “give new voices a chance to go into government service.” The public’s building distaste for professional politicians like Hillary Clinton is among the main reasons he was elected.

Trump supporters were probably hoping that the president-elect’s Cabinet choices would reflect his drain the swamp mantra, but it’s becoming clear that Trump’s version of that is the opposite of what he promised. His version of draining the swamp was actually to fill it with people who spread conspiracy theories, bankers, CEOs, retired generals, politicians, and billionaires. Basically, we are looking at a bunch of people who are so deep in the swamp they’d need a periscope to see the sun.

But upon closer inspection, Trump actually does appear to be draining something: experience. An alarming number of Trump’s picks for Cabinet or other high-level agency positions possess a striking dearth of relevant qualifications for the fields in which they will be working. It’s set to be a veritable parade of people who don’t know what they’re doing. No wonder some Trump supporters are experiencing buyer’s remorse.

So, without further ado, here are the least-qualified picks of the Trump administration (so far), including Cabinet members and Cabinet-level officials:

DeVos and her husband, Dick DeVos Jr., are major Republican donors, donating $2.7 million to Republicans via political action committees in 2016. DeVos has never held an executive position, aside from serving as chair of the state GOP from 2003 to 2005. Since then, her political activity has come in the form of advocating for “school choice” and private school voucher programs. These programs purportedly exist to provide taxpayer-funded initiatives to help families send their kids to a school of their picking. They have often been accused of, in reality, subsidizing private school education to the detriment of public schools that serve lower income and minority communities. It’s no doubt DeVos would like to see national versions of the programs she’s sponsored, and as education secretary she stands to do serious damage to America’s already imperfect public school system.

McMahon is anything but a small business owner. As the mega-rich CEO and co-founder of World Wrestling Entertainment (WWE), McMahon was one of Trump’s largest benefactors during his presidential run. She’s clearly being rewarded for her support with this appointment. Trump said of McMahon, “She helped grow WWE from a modest 13-person operation to a publicly traded global enterprise with more than 800 employees in offices worldwide,” which surely means that she’ll know just thing to get your local mom and pop grocery traded on the Japanese stock market.

McMahon has never once held elected office, despite two failed Senate bids in 2010 and 2012. She’s held no political office higher than a brief, one-year stint as a member of the Connecticut State Board of Education in 2009. But Trump probably saw the word “business” in Small Business Administration and figured any old CEO would do.

The Attorney General of Oklahoma, Pruitt is Trump’s pick for head of the Environmental Protection Agency. A reasonable observer might ask, “Hey, what does being attorney general of an oil-rich state have to do with heading up the crucially important EPA?” The answer is nothing whatsoever.

Although, to say that Pruitt has no experience with the EPA doesn’t capture the full picture. He actually does have a connection to the agency — in the form of a lawsuit he’s filed against it. That’s right. Trump’s pick for head of the EPA is currently suing the EPA to get rid of President Obama’s environmental regulations. As head of the EPA, Pruitt will probably only be good at one thing: beginning to dismantle Obama’s climate change policy.

Puzder would arguably be the least experienced labor secretary since the Reagan administration, and only the second in history to get the job with only private business experience. As the CEO of a fast food conglomerate, Puzder is known for his opposition to a minimum wage increase and support for automating the workforce, both things that would hurt the low income laborers who lifted Trump into the presidency.

Given his views and profession, Puzder clearly has no experience (or interest, for that matter) in advocating on behalf of labor. It appears that Puzder will look to be an ally for management and business owners, rather than their employees. In other words: No different from the past Republican administrations that Trump railed against in his campaign. Welcome to the swamp, Mr. Puzder.

Flynn has proved to be a propagator of three things: Pizzagate, fake news, and the “lock her up” rhetoric. The job of the national security adviser is to provide clear, levelheaded, and nonpartisan advice to the president on all matters relating to, well, national security. But “levelheaded” is not a word that should be applied to Flynn at this juncture.

Flynn would have topped this list, as the most ill-conceived off all these individuals, were it not for a certain neurosurgeon who edged him out.

Carson almost didn’t make this list, because he almost wasn’t in Trump’s Cabinet. A few weeks ago, Trump named Carson as a potential pick for his Secretary of Health and Human Services. Alarming to be sure, considering how Carson believes the Egyptian pyramids were built by the Christian figure Joseph to store grain, but fine. He’s a doctor. The position has the word “Health” in it. Can you blame Trump for making that connection?

Carson, however, turned down the opportunity. His business manager Armstrong Williams told The Hill that Carson “feels he has no government experience; he’s never run a federal agency. The last thing he would want to do was take a position that could cripple the presidency.” This was coming from the man who only months before was trying to get himself elected president.

After initially skipping out, Trump tapped Carson again, this time as Secretary of Housing and Urban Development. Carson, apparently forgetting how he felt the first time Trump offered him a position, accepted. Carson has exactly zero qualifications or experience that would make him fit to serve in this position. He didn’t even, as some have suggested, grow up in public housing. Nancy Pelosi, the House Democratic leader, called him “disturbingly unqualified.” A more fitting descriptor there is not.