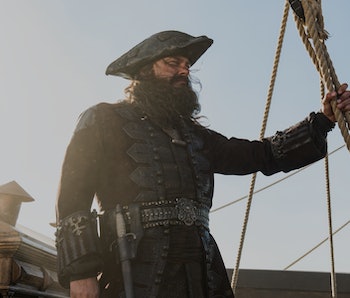 Ray Stevenson’s Edward Teach, aka Blackbeard, navigated exceptionally rough waters in Season 3 of Black Sails. He swaggered into the story with a bang, bringing an old school cowboy attitude to piracy. He returned to Nassau only to find the place changed; its inhabitance far less fierce than he’d like. He had an epic duel with Flint, but saw outside interference (from Charles Vane) before he could win. And he reunited with his quasi-son Charles Vane, only to see him turn to Flint instead.

To rub salt in the wound, he then then lost Charles Vane to the noose. Blackbeard’s Season 3 story ended with him calmly swearing vengeance for Vane’s death. “They though they could do it and face no consequences,” he said. “They failed to account for me.”

Season 4 will see him out for blood. He’s got an unlikely and delightful alliance with Jack Rackham, whose flamboyant nature clashes with his ubermasculine ideas of what a pirate should be. He’s part of a new coalition with Rackham, Flint, and the newly crowned Long John Silver. And through it all, the specter of his own death looms in the form of an old bullet lodged near his heart.

In Inverse’s exclusive video from Starz, catch up with Blackbeard’s evolution.

Revisit our interview with Ray Stevenson on his secrets to badassery here.

The fourth and final season of Black Sails premieres on January 29th on Starz.