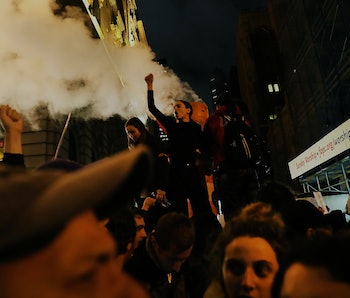 One of the last legal ways to prevent a Donald Trump presidency lies in the Electoral College’s “faithless electors.” See, the appointed voters that actually decide the fate of the U.S. Presidential Race don’t have to vote for who their respective political parties tell them to. But the best way to convince electors to ditch their faith probably isn’t a Change.org petition — but it could be in a Kickstarter.

After Trump surfed a wave of populist zeal and white supremacist rhetoric to victory over Democratic candidate Hillary Clinton in Tuesday night’s presidential election, his dismayed opponents have been looking for any way to wake up from their American nightmare.

They tried visions of a hopeful, millennial-only electoral future, widespread protests, and dreamed of Trump’s impeachment, but the internet thought its best chance to avoid a Trump presidency was to convince the Electoral College’s electors to switch their votes.

At the time of publication, the official Change.org petition “Electoral College: Make Hillary Clinton President on December 19” had just broken 1,000,000 signatures since the election. While the widespread, viral support of over a million Americans, coupled with the fact that Clinton won the popular vote, might help some electors find conscience and courage when they go to the polls on December 19, what they’re really going to need is cash.

Of the 50 states, 21 have no legal control over how their electors vote. There’s no federal law against it either, which means that electors can pretty much do whatever they want in those states. But in the other 29 states (plus the District of Columbia), the state government has legal control over how their electors vote, which means that for electors to switch their votes to Clinton, they’ll need a lot more than popular support. It’s worth noting, at this point, that historically speaking, there’s almost no chance of faithless electors actually swinging an election. But if any candidate is able to break 240 years of Electoral College conformism, it’s probably Donald Trump.

Still, voters that switch, especially in the 29 restricted states, aren’t going to get off easy. The state statutes that bind electors to their party’s choice vary, but the precedent in most previous cases has just been to charge faithless electors with a misdemeanor and slap them with a fine, usually $1,000. Clinton lost by 51 electoral votes, which means that at least 26 electors would have to swap. While there’s certainly more than enough signatures on the petition, it might be more convincing if advocates set up a nonprofit organization that could cover the cost of fines and any legal fees that arise after electors switch. This money wouldn’t be just given to the electors — that would be bribery — but it might ease an elector’s anxiety about switching their vote if they knew their was a fund set up to protect their personal finances from the repercussions of their decision. According to the Federal Government, “No Elector has ever been prosecuted for failing to vote as pledged,” but the electors have never flipped the outcome of an election before, so it would be good for them to be prepared.

More like this
Culture
Sep. 16, 2022
How an ultra-nationalist religious group became one of the most popular film producers in Japan
By Alicia Haddick
Culture
Sep. 28, 2022
'Rings of Power' fixes Peter Jackson's most iconic mistake
By Jake Kleinman
Culture
Sep. 27, 2022
8 thrilling sci-fi movies and shows new on HBO Max and Netflix in October 2022
By Robin Bea
Related Tags
Share: