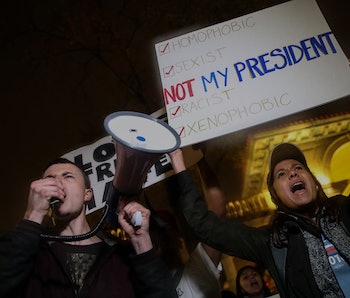 On Wednesday night, thousands of New Yorkers congregated in Manhattan’s Union Square to protest the election of Donald Trump. Organized through social media, the event was intended to give voice — and perhaps some solace — to those who oppose Trump’s proposed policies and find his rhetoric either frightening or offensive. Protestors chanted a variety of things, including “Not my president,” “Pussy grabs back,” and “Fuck Donald.” Then the crowd began a long march toward Trump Tower.

With many experts crediting the results in part to social media echo chambers, Inverse asked those in attendance whether or not they were surprised that so many people elsewhere in America supported a candidate so deeply unpopular in his hometown.

“It’s understandable. People do feel like they’ve been pushed to the side and not accounted for or cared for and a lot of the grievances that a lot of people in those states that voted for Trump are real but they chosen to address them in the worst way possible and i think it’s only going to make this country a lot worse for it.”

“This election is the worst thing that ever happened. Donald Trump sucks and he’s somebody that needs to be stopped. This was a joke that was taken way too far.”

“It feels like there’s a big divide in the country and everything is very isolated like the coasts and then the middle of the country. It’s just strange and upsetting.”

“I’m from the West Coast, and I’ve lived in New York for 21 years so I’m in the blue area. I didn’t vote for Hillary either, but I’m not surprised that it’s this bad. I think corporate media really deceives us into thinking that we’re okay when we’re really not okay. It’s time for people to wake up and see the acute gravity of the situation. How much people are tolerating fascism and repressive ideas, people’s acceptance of those speaks directly to how bad the situation is. It’s really time for us to unite and organize and educate ourselves on what’s happening.”

“I’m not surprised sadly because I think that a lot of people don’t say how they actually feel about other races, gay people, I just don’t think people are honest about that. I think it truly showed how people really feel, at least certain parts of America.”

“To me it was not surprising because the shortcomings of modern capitalism means white poor people are going to turn their backs on other poor people and vote for a rich white person because they think he’s going to help them. They think he’s the anti-establishment candidate and that he’s going to fix the system for them. They’re voting for someone who’s speaking to them directly and speaking their language. Because these people feel disenfranchised by our government and our capitalist system, they’re looking for another option and Trump was that option for them.”