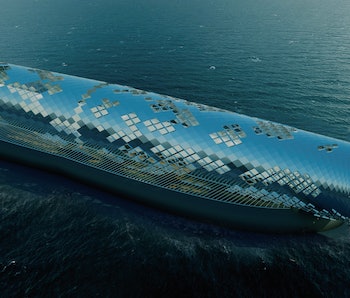 California has had state-wide drought restrictions in place for years, to the point where some have asked if the Golden State will be dry until the clock finally runs out on this ball of dirt we call the Earth.

This pipe is supposed to help solve those problems by filtering seawater. Unlike the filtering systems that are already used, though, it would use electromagnetic filtration to gather drinking water without having an adverse effect on the oceans themselves. The system is more energy efficient — it relies on solar power, too, which helps it reduce its impact on the environment — and attractive than any of its predecessors.

Perhaps the most interesting thing about The Pipe, as it’s known, is that it’s meant to be a place where communities would hang out, take a dip in thermal pools, and watch the system do its job. All that while also going completely off-grid by harvesting energy through solar panels and providing clean water by filtering out all the seawater that surrounds it.

The whole concept is similar to a vacuum revealed by Dutch researchers in October. That device is designed to remove particles from the air so people don’t have to suffer from heart problems, cognitive defects, and other issues caused by inhaling fossil fuel emissions. This pipe, meanwhile, removes the salt that makes seawater undrinkable.

Both systems achieve similar results: Filtering out the stuff that prevents us from thriving on this planet while we try to reduce our dependency on fossil fuels. That probably won’t be sustainable in the long term, and it might simply delay the seemingly inevitable climate change apocalypse, but at least it helps.

The Pipe was revealed as part of the Land Art Generator Initiative that tasks researchers with creating sleek devices that can help the environment. The focus of this year’s event was “coastal,” which is why the team behind The Pipe focused on the very California problem of living in a half-decade-long drought while being surrounded by water.

Inverse reached out to the team behind The Pipe to learn more about its future, and we’ll update this post if they respond. For now, though, the state will have to put its hope in solar panels that create drinking water for small families and convincing people to take shorter showers.