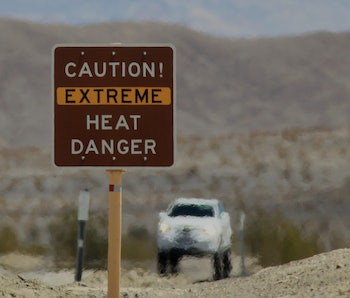 California has experienced droughts that lasted longer than most human civilizations do, and the next drought could well last longer than any of us are going to be around for. That’s because, according to new research from climate scientists at UCLA, America’s most populous state has long been susceptible to long-term drought conditions, and the advent of global warming and the increase in greenhouse gases make it all the more likely that the next drought could effectively be permanent.

There are a whole bunch of factors that can reshape a region’s climate, from a shift in solar activity to a dip in volcanic eruptions. The general name for these phenomena is radiative forcing, which in the past has been responsible for droughts in California that lasted anywhere from 60 to 5,000 years. As lead researcher Glen MacDonald points out, a drought lasting generations — let alone one lasting millennia — isn’t really a drought after awhile, but rather just the way things are.

Greenhouse gases represent a modern source of warming that can also drive radiative forcing. That makes the drought conditions in California all the more precarious, as now there’s less need for a change in sun spot activity or the Earth’s orbit to trigger a long-term drought. And, pretty much regardless of what climate policies we adopt over the next several decades, greenhouse gases are likely to increase, which means even greater potential for radiative forcing.

If California does enter another essentially permanent drought, MacDonald sees the state’s entire ecosystem rearranging itself, with forests giving way to grasslands and deserts, lakes drying up, and fires becoming more common. While this wouldn’t mean the end of life as Californians know it, this would mean devoting even more resources to irrigation and other big agriculture engineering projects than the state already does. And even if farming did survive, the current wild ecosystems would likely perish.

So that’s what could happen if California enters a permanent drought, but what would get it there? According to MacDonald’s research, the answer lies in the Pacific Ocean. His team was able to assemble and compare prehistoric climate records for both California and the Pacific. They found that long-term changes to the surface temperature of the Pacific were closely tied to drought conditions in California.

Some of this also has to do with weather patterns in the Pacific: El Niño conditions can increase precipitation, staving off drought, while extended spells of low-precipitation La Niña conditions can compound the already warm conditions. The combination of radiative forcing — which, with the rise in greenhouse gases, is going to be an issue indefinitely — and a shift toward La Niña in Pacific Ocean weather patterns appears to be enough to lock California into arid conditions for the foreseeable future.

While MacDonald and his team kept the focus on climate records in their home state of California, these kinds of climate events often have global repercussions. The 5,000-year drought from 6,000 to 1,000 BCE was felt throughout the northern hemisphere, and a brief, El Niño-fueled shi wetter conditions around 2,200 BCE was severe enough to topple empires and disrupt civilizations elsewhere in the world. Modern climate change could well have similar society-shaking repercussions, assuming it hasn’t already.

MacDonald’s research was published this week in the Nature journal Scientific Reports.