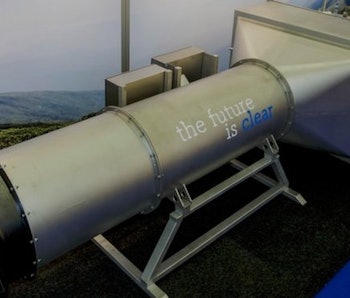 Breathing polluted air can lead to heart disease, cancer, and other health issues that can take years off someone’s life. As the world lurches towards using energy sources that don’t release these harmful particles into the atmosphere, Dutch scientists revealed on Tuesday that they built a stopgap solution to the problem: A giant outdoor vacuum that filters pollution out of the air around it. This is the device that might help us live long enough to see clean energy take over the world.

The vacuum was made by Envinity Group, and it was unveiled during the 2016 Offshore Energy Exhibition & Conference in Amsterdam, the Netherlands. The company said that the vacuum cleans the air within a 300 meter (984 foot) radius and up to a seven kilometer (4.3 mile) height at a rate of 80,000 cubic meters of air per hour. It also said that this vacuum will allow governments and businesses to “protect their environment against the ‘silent killers’ that are fine- and ultra-fine particles, and to stop worrying about dramatic economic effects.”

World Health Organization’s (WHO) regional office in Europe said in 2013 that more than 80 percent of the European Union’s population lives in places where the levels of particulate matter (which includes fine and ultra-fine particles) is above WHO’s air quality guidelines. In addition to heart and lung problems, exposure to these pollutants has been linked to “diabetes, neurological development in children, and neurological disorders in adults.”

The shift to clean energy could help reduce the number of these particles in the air. But while solar power is growing more popular and burning coal is falling out of favor, a sea change to clean energy is still a long time off.

Envinity Group’s giant vacuum could help keep us alive — with the requisite neurological capabilities — by making sure that shift occurs. And even after clean energy becomes more popular, this vacuum could still filter out particles released during construction, wildfires, and other phenomena. Inverse contacted the company to see when the vacuum might debut, and at what price; we’ll update this post if it responds.

More like this
Innovation
Sep. 28, 2022
Look: This tiny robot could change medicine forever
By Katie MacBride
Science
Sep. 24, 2022
Puerto Rico: 8 images reveal devastation left by Hurricane Fiona
By Jennifer Walter
Innovation
3 hours ago
This is how scientists will predict the next massive hurricane
By Abe Musselman
Related Tags
Share: