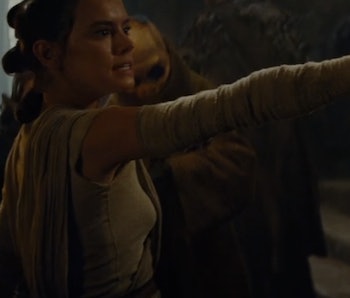 One of the biggest questions of Star Wars: The Force Awakens was, “Whatever happened to Unkar Plutt, the blobby one-time owner of the Millennium Falcon? Now, a new deleted scene shows us Chewbacca and Rey squaring off against Plutt with deadly results.

In the theatrical release, the last time we see Unkar Plutt (Simon Pegg) was when he yelled up to the sky at Rey and Finn as they rode away on the “stolen” Millennium Falcon. A deleted scene from the forthcoming 3D Collector’s Edition Blu-ray, partially released by EW, confirms that Unkar was able to track our heroes down, which isn’t all that surprising considering Han Solo himself said that people could be following the Falcon’s trail.

In the released part of this new deleted scene, we see Unkar confront Rey at Maz Kanata’s castle, threatening to make her pay for what she did. Luckily, Chewbacca steps in to defend his new friend. Unkar Plutt stupidly decides that it’s a good idea to literally poke the bear, and we end on a cliffhanger.

But the rest of the scene, as described by EW, definitely doesn’t leave anything hanging. If you didn’t read the Star Wars novelization and don’t want any spoilers, don’t keep reading.

Chewbacca rips his arm off. That’s right, with a crunch and a whoosh, one of Unkar’s arms comes soaring off and lands right in the middle of the gambling table. Talk about some conflict resolution.

While that moment of carnage definitely put an end to Unkar Plutt’s whining, that doesn’t mean it’s the last time we’ll see or hear of him. As we saw in Rey’s Force flashback, she was originally put in his care by an unknown person or persons. Unkar Plutt might know more about who she is and where she comes from, information that Luke Skywalker can’t or won’t tell her. Or he’s just left to wander the Star Wars abandoned character wasteland like an armless Jar Jar Binks.