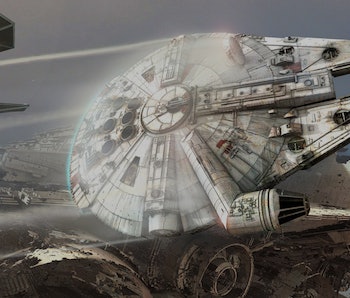 Han Solo told us the Millennium Falcon made the Kessel Run in less than 12 parsecs. Even though this was never actually depicted in any of the Star Wars films, we can now hear what this famous space race achievement sounds like thanks to a new piece of music.

The famed hyperspace route was meant to be used by freighters to transport spices from the mines of Kessel. As it was notoriously difficult to pilot, smugglers like Solo saw it as a challenge, an adrenaline-charged escape route to keep out of sight and win bragging rights. And while John Williams never composed an original masterpiece for Solo’s achievement, composer Matt Hawken took it upon himself to create one. “There are so many moments that never ended up on film,” Matt Hawken told Inverse, “Like the Kessel Run … or Admiral Ackbar’s backstory. While some people may write or draw these nonexistent scenes, I started to imagine them the only way I know how: which is with music!”

Calling the original Star Wars score “infectious,” Hawken cites Williams as one of his greatest influences, not just in writing musical fanfiction for hidden Star Wars scenes, but also for his everyday work.

“His scores have everything that I enjoy in music — strong melodies, intricate details, beautiful orchestration and lots of humour and fun,” Hawken explained. “So when I’m writing for these imaginary scenes, I want to capture the ‘Star Wars sound’ as best I can, with all its brassy fanfares, lush string melodies, and quirky woodwind writing.”

Hawken holds a degree in composition and orchestration from Oxford University and combines what he calls “new-school” and “old-school” processes to create the depth of sound and emotion he expects from his finished products. The “new-school” version of things is more readily learnable than the old-school; it’s making choices about reverb and panning, EQ, compression, and much more. It’s all technology-based, and it combines programs that make his poor Mac probably sound a lot like the Falcon on Hoth.

Meanwhile, the old-school part of things involves “writing appropriately for the instruments and orchestrating effectively,” he says. That’s where his music degree comes in and his experience in playing and performing the piano, keyboard, cello, and oboe. “For example, with my strings, what you’re hearing is a dry recording of a string section recorded out in LA,” Hawken said. Every note is sampled at different volumes with different techniques “which then allows me to control every detail,” he said. “It’s quite laborious, but then so is every other art form, I guess!”

We hope to hear more musical fanfiction from Hawken in the near future. How about theme for Leia’s childhood on Alderaan? Or a track for Luke’s races in Beggar’s Canyon to test out his piloting skills? Once you start imagining fanfiction Star Wars music, the more of it you want.