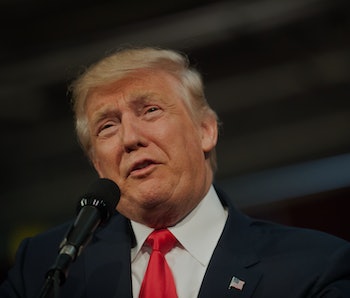 Between all the talk of locker rooms, sex tapes, and the Devil, the second presidential debate between Hillary Clinton and Donald Trump covered all manner of awkward topics, bar one: legal weed.

Both candidates have been relatively reticent about their platforms on marijuana. Clinton wants to reclassify marijuana as a Schedule 2 drug and has been significantly less cagey than Trump, whose stance on the drug remains as slippery as his morals. But given his all-encompassing interest in profit-making and the fact that he might actually be poor, it wouldn’t be a huge stretch to imagine a Trump presidency actually being good for legal weed: The industry was predicted to bring in some $6.7 billion in profits in 2016 alone, and it’s not unreasonable to think Trump wouldn’t want a slice of that — for America, of course.

Perhaps marijuana’s profit-making potential is why Trump’s platform on the drug has been so uncharacteristically middling. His vague statements in interviews, such as the one he made on The O’Reilly Factor in February, have provided little actual information about his stance but have revealed, instead, a strategy that is open-ended and frankly, politically and economically savvy: When asked, point-blank, what he would do about medical marijuana as president, Trump responded: “I would really want to think about that one, Bill. Because in some ways I think it’s good and in other ways it’s bad.”

One of the ways Trump views marijuana as “good” is probably its huge potential to rake in profits. According to “The State of Legal Marijuana Markets” report released in February by weed industry data crunchers at Arcview Market Research, legal cannabis — that includes both medical and recreational, wherever it’s currently permitted — stands to bring in $21.8 billion in total annual revenue by 2020, as Fortune reported in February. If Trump is serious about his promise to bolster a new, pro-growth economic policy by creating 25 million new jobs, he would be crazy not to consider supporting the burgeoning legal marijuana industry, which was estimated to create 200,000 new jobs in 2015 alone within the related dispensary, medical, administrative, and sales industries. On top of that, businesses related to legal weed, ranging from tourist-friendly cannabis ranches to pot-spiked Nutella manufacturers, are poised to bring in the green.

Trump’s mistrust of monopolies are a huge impediment to his pro-growth economic policy, but might sway him toward the pro-legalization camp. In his tirade against Obamacare in Sunday’s debate, he called Americans to break down the “artificial” lines around the state to allow alternative insurance companies to compete, preventing the formation and proliferation of healthcare monopolies. As it stands, the state-centered laws surrounding legal marijuana are threatening to put the control of marijuana farms and sales in the hands of a burgeoning cannabis elite. In Ohio, for example, tensions flared in November 2015 when the prospect of legalization recreational marijuana also meant handing over control of a $1.1 billion industry to just ten celebrity growers (the amendment ultimately failed to pass). Legalizing marijuana on the national scale would inevitably remove those state-specific barriers preventing competition or at least make them easier to circumvent, thereby promoting growth.

How realistic would marijuana legalization in Trump’s America be? At the Conservative Political Action Conference in February 2015, he told Sean Hannity that he “feels strongly” about withholding his support for recreational marijuana but is “100 percent” behind medical marijuana. That conversation, however, took place before he announced his candidacy for president, and his remarks since then have all shrugged off decision-making responsibilities to state governments. Now, under the “Positions” section on his campaign’s official website, there’s nothing written about his stance on marijuana. In fact, there’s no mention of drugs in general, with the notable exception of drug smuggling in relation to “that Mexican thing” — that is, how to stop their influx into America via that pesky, as-of-yet-unwalled southern border.

Yet who can really predict what will happen under a Trump presidency, based on his present statements? In 1990, Trump was in favor of legalizing not just marijuana but all drugs, as he famously quipped at a Miami Herald luncheon. Perhaps Cato Institute executive vice president David Boaz put it best in an interview with The Daily Beast about Trump’s marijuana policies: “My sense is that looking for consistent philosophy or even policies in Donald Trump’s statements is a pretty fruitless exercise.”