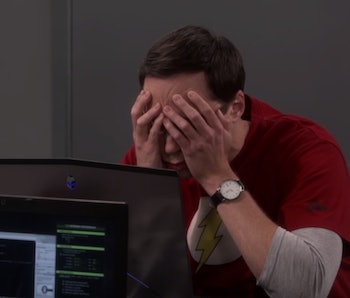 On Monday’s episode of the The Big Bang Theory, theoretical physicist Sheldon Cooper claims he’s addicted to the most commonly used drug in the world: caffeine.

“Oh no, I need another one,” Sheldon bemoans, in the comedown after his very first energy drink. “That’s a craving! That’s a sign of chemical dependency.”

While Sheldon begins to freak out that “plenty of things are addictive after a single exposure,” his fellow nerds roll their eyes and assure him that caffeine addiction doesn’t take hold so fast. And they’re right — while Sheldon might know physics, he certainly doesn’t know enough about chemistry: A single energy drink won’t create an addiction but a week of having one cup of a coffee a day just might.

Caffeine, a central nervous system stimulant, blocks the brain’s cell receptors for adenosine — a molecule that builds up in the brain and makes you sleepy. That’s why caffeine helps you feel energetic and alert. The FDA says that consuming up to 400 milligrams of caffeine a day is okay, which is good because on average 90 percent of American adults consume around 200 mg every day (to have a comparative understanding, a medium coffee usually has about 300 mg of caffeine and a 16-ounce energy drink has between 160 and 240 mg).

While it only takes a consumption of around 30 mg of caffeine to create a difference in mood, that still doesn’t mean that one cup of coffee (or one energy drink in Sheldon’s case) would cause you to become addicted. For typical non-users or just intermittent users, low doses of caffeine usually cause positive emotions like increased well-being, happiness, and sociability. Addiction takes time, typically between a week to 12 days of daily caffeine consumption. That’s when withdrawal will hit you if you don’t get your daily fix — feelings like irritability, anxiety, and drowsiness.

While caffeine addiction doesn’t come with the same life-threatening risks like an addiction to cocaine or nicotine, the World Health Organization recognizes caffeine addiction as an example of substance abuse because it still creates cognitive, behavioral, and physiological symptoms. The problem with most people, however, according to researchers at John Hopkins, is the opposite problem that Sheldon’s experiencing — they typically don’t think they have an addiction and blame their symptoms on something else, like having allergies.