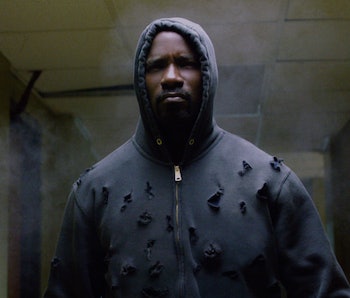 If you spent the weekend curled up on the couch, binge-watching Luke Cage on Netflix, you’re not alone. We all did. It’s fantastic. It’s poignant. It (literally) breaks down barriers that the Marvel Cinematic Universe has kept in tact until now.

We think this goes without saying, but: spoilers ahead, you guys.

Combining themes of race, religion, power, and what it means to be a hero, Luke Cage has officially ushered the MCU into what we hope is a new era of modern awareness. We won’t get a taste of what’s to come until the eight-episode superhero extravaganza that is The Defenders airs on Netflix in 2017, bringing Luke Cage back our way.

But, in the meantime: Here are some ways that Luke Cage managed to win our loyalty like he did the people of Harlem’s, steal our hearts as easily as he stole Claire Temple’s, and completely alter the MCU for the foreseeable future.

Luke Cage gave us an exhaustive roundup of villains unlike any MCU project we’ve seen before, whether that be movies or television. By the end of the season, you find yourself actually invested in these characters who have done nothing but cause problems for the heroes of the story.

Corrupt Harlem councilwoman Mariah Dillard evolves (or perhaps devolves) in front of our eyes as we get a taste of her upbringing: the expectations and pressures applied by her formidable grandmother and the sexual abuse doled out by her uncle. It’s the latter — her uncle’s gross sexual misconduct — that is her breaking point.

And it’s Mariah’s murder of her cousin, Cornell “Cottonmouth” Stokes, that turns Mariah into an all-out villain, possibly putting her on a path more similar to Black Mariah’s in the comics. (Black Mariah being the inspiration for this character). She kills Cottonmouth after he accuses her of having seduced their uncle. The “you were asking for it” mantra is strong in the scene — horrifying, even — and Cottonmouth’s accusations ring in time with the breakdown of his character. It’s around the time of his murder that we find out about his depths as a talented keyboardist. He could have followed a very different path if not for the influence of his grandmother. This realization turns him from a purely cruel villain to a sympathetic character in the audience’s eyes, even if just for a short while.

There is an irrefutable, tragic poetry to a story about a bulletproof black man in the current political climate. And Luke Cage doesn’t “just so happen” to be black. Luke Cage is a multifaceted character who punches through walls with ease, is silent more often than not, and puts the lives of others before his own. And he’s black.

Luke Cage and its characters are unashamed of their roots, and acknowledging said roots results in some the most undeniably powerful scenes in the whole show. From the showrunners’s choice to put Luke in a dark, hooded jacket to outright comments about police brutality and the dangers of being a black male in America due to bias (implicit or otherwise), Luke Cage is wholly political in a way no MCU project has been before.

In an interview with Huffington Post, Mike Colter (Luke Cage) confirmed that his wearing a dark hoodie is a homage to Trayvon Martin and “others like him.”

“When you’re a black man in a hoodie, all of a sudden you’re a criminal,” Colter says. “We wanted to pay homage to that; it’s not something we were shying away from.”

The pride is palpable. When the citizens of Harlem gather in Luke’s corner, buying hole-ridden hoodies to wear on the street, daring the system to stereotype them, you can’t look away.

Women of Color are Treated as People

We’ve been treated to the gift from above that is Claire Temple in both Daredevil and Jessica Jones, but this is the most we’ve ever seen of her. She starts as an ally, turns into a friend, and becomes something — ahem a little more by the end of the season. One thing always comes first in Claire’s mind, and that’s the safety and health of others before herself. If that isn’t the definition of a hero, we don’t know what is.

Misty Knight is the complicated and imperfect hero we don’t deserve, and yet desperately need. She’s both proudly black and proudly a cop, and balancing her love for her community with the stringent and often unfair rules of her profession becomes a main point of personal contention for her. “People hate us until they need us,” she says to Priscilla Ridley (another black woman in a position of power). “And I hate that. But I love it too.”

Then, of course, there’s Mariah Dillard. See above.

Hammer Industries Ruins Everything it Touches

Finally, and as a tie-in to Marvel projects past, there is the presence of Hammer Industries’s Judas Bullet. Needless to say, Justin Hammer is still an asshat, and is still making everyone else’s lives difficult to satisfy his ego.

Our new favorite MCU hero, Luke Cage, is the recipient of said Judas Bullet, the only weapon found in Luke Cage to be able to penetrate his otherwise impenetrable skin. Other than brief mentions of the “The Incident”/ the “Battle of New York” from The Avengers, the Judas Bullet is the most obvious connection from the MCU Avengers timeline to Netflix’s television world. It directly links Iron Man 2 to Luke Cage in a way that hasn’t been done up until now. And we love it.