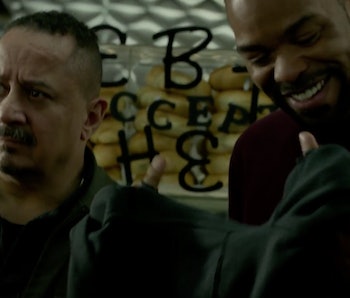 Method Man, a long-time Marvel fan, officially exists in the MCU. A new trailer for Luke Cage shows our hero walking into a bodega to stop a robbery, and it just so happens that Method Man is chilling by the bagels. The men recognize each other, hug, and Luke switches hoodies with Method Man, presumably to hide the fact that he’s been riddled with bullets.

The quick exchange makes Luke Cage the MCU’s most present and culturally embedded project since Guardians of the Galaxy, which saw Star-Lord trying to explain the plot of Footloose to Gamora. What’s unique in Luke Cage is the fact that Method Man actually exists in Luke Cage’s Harlem and knows what superheroes are. If he knows who Luke Cage is, for example, it’s probable that Method Man was watching the Avengers save New York. He probably has opinions on Kingpin, too, and there’s every chance that he’s met Tony Stark at a gala or awards show before.

Of course, if superheroes like Luke Cage were real, Method Man would probably be one of the first to know, as he’s famously been a Marvel-obsessive for decades. In 2010, Method Man released Wu-Massacre with the rest of the Wu Tang Clan, a collaboration-style album that featured art by Marvel artists Chris Bachalo, Tim Townsend, and Alex Haldi. In 2015, he said he’d love a crack at writing Ghost Rider, and that his favorite comic at the time was Marvel’s female Thor. He was a part of the Netflix series’ promotions from the beginning, appearing in a video to explain how Luke Cage’s soundtrack was going to shape each episode.

Even if this is the only appearance Method Man makes in Luke Cage, it’s still a welcome testament to the show’s unique appeal. While Marvel has sold plenty of heroes to viewers in recent years, Luke Cage will probably be the coolest.