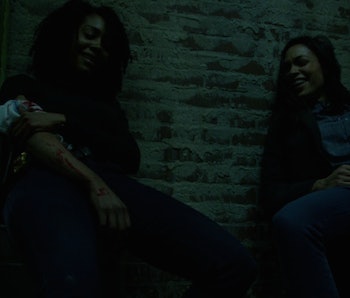 Strap in, Marvel fans: It’s going to take weeks for fans to completely unpack all the reasons Luke Cage is fantastic. The show could have fallen into the same traps as every other television show out there, but it didn’t. It treats its non-white characters with respect. It portrays Harlem as a complex, vivacious borough for the first time in Marvel’s history. It gives its female characters their own stories without having them rely on input from male characters, and it follows the lives of multiple female characters of color, allowing them both agency and the ability to talk things out with each other without making them rivals for male attention.

What happens, for example, when Misty and Claire, Luke Cage’s primary romantic interests, are left alone during a crisis?

In the season’s eleventh episode, “Now You’re Mine”, Luke does his best to keep Misty Knight alive in the basement of Harlem’s Paradise after she’s been shot, resulting in a torn artery in her arm. There’s a particular scene where Luke assesses the damage done, and Misty’s blood doesn’t so much drip out of her as it does pour. Just as Misty begins to look faint, the audience realizes there’s a person present in the club who could take care of that injury, no problem.

But Claire Temple — the one in charge of the “medical shit” — has been taken hostage. Oh, no!

Luckily for everyone, though, Claire saves the day and Misty lives, resulting in one of the greatest scenes in recent television history.

“You’re good at your job. I’m good at mine,” Claire tells Misty. The unspoken tension between them is still palpable at this point, simply begging for the writers of Luke Cage to diminish these female characters into two points in a love triangle.

Misty, at one point, notes that Luke and Claire sound like a married couple when they talk. “It’s good,” she murmurs, when they both pause. It’s pretty unclear at the time whether or not her comment is due to severe blood loss, but that’s quickly cleared up.

Claire and Misty tag-team to take on Shades, eventually handcuffing his ass to a pipe before they both collapse on the nearest beer kegs.

“Likewise,” Claire says. Misty offers up that she learned her fighting skills from her father, and Claire from her uncle. Both their tones hold such a sense of pure irony over having learned their fighting skills from men — when it’s a man at the source of this tension between them — that they fall into exhausted laughter. They even discuss “coffee,” Luke’s euphemism for sex, and both characters visibly realize that Misty has already had sex with Luke, while Claire is probably on her way to achieving that same end.

In that single moment, the tension between them dissipates in the basement of Harlem’s Paradise — they’re literally on the lowest level in those tense moments. It almost seems that the laughter is that of the writers, laughing at the mere idea of falling into a trap as overused and lazy as a love triangle. There’s no reason these two talented, intelligent women wouldn’t get along perfectly well.

And — Sweet Christmas! — the writers of Luke Cage have more respect for their female characters than that.

More like this
Entertainment
7.4.2022 11:30 AM
10 years ago, the most misguided Spider-Man movie almost killed the franchise (again)
By Felipe Rodriguez Torres
Culture
3 hours ago
8 Norse gods you need to know before Thor: Love and Thunder
By Robin Bea
Entertainment
6.30.2022 3:14 PM
Who is Red Dagger? Meet Ms. Marvel's first real sidekick (and first kiss)
By Eric Francisco
Related Tags
Share: