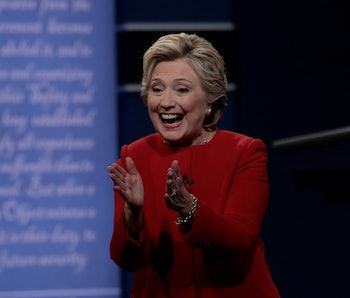 Hillary Clinton — self-described “pantsuit aficionado” — strode into Monday’s presidential debate in an all-red pantsuit ready to talk shop and use the power of psychology while she did so. Contrary to Donald Trump’s use of blue and black in his wardrobe, the color red is demonstrably tied to intimidation and domination. Some might call it a “presidential look.”

Red has been proven to have a strong effect on the psyche across a multitude of studies. In 2005, evolutionary psychologists found that when people wore red they would win matches in Taekwondo, boxing, and wrestling about 60 percent of the time. When the competitor’s physiology was examined, the researchers found that the athletes in red actually had a higher heart rate and greater strength before the fight than those in blue. When judges were asked who seemed more likely to win they said the athletes in red. This pattern repeated again in a 2008 match where referees were more likely to award points to athletes in red.

Comparatively, the color blue (like the blue on Donald Trump’s tie) typically gets people calm and tranquil. In a comparative study of blue and red, 600 people were asked to do work incorporating images displayed either on blue or red desktop backgrounds, then were asked to do a series of tests. The people who used a blue background did better on tasks requiring imagination, while the people who used red excelled on tasks that required recall and attention to detail — tasks that might, you know, help you do better in a debate.

Why are people so sensitive to color? Some researchers think that colors affect cognitive performance because they unconsciously stimulate the moods of the things they’re typically associated with — like blue and a calm ocean or red and an emergency sign. But scientists also look to animals to see why the human brain is particularly influenced by red.

A Nature article argues that red coloration is a “sexually selected, testosterone-dependent signal of male quality.” Monkeys, in particular, have been proven to see red as a sign of aggression and are less likely to be combative with human handlers wearing red versus other colors. Scientists believe this association between red and power holds true in humans too, and that over time has influenced our response to the color.

It’s likely that Hillary and her campaign understood that what you say during a debate isn’t all that matters and much like John F. Kennedy during his own debates, she was ready to help make her opponent fade away in the background. Wearing red to a debate is a sure fire way to add a bit more oomph.