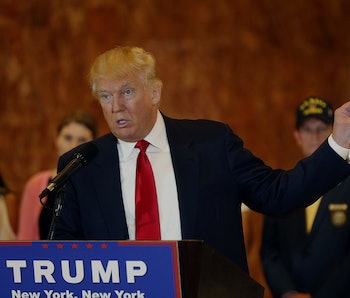 Monday is the start of a series of presidential debates that will likely make the infamous Nixon-Kennedy showdowns look as tame as two red pandas frolicking in the snow. When Hillary Clinton and Donald Trump step up to their podiums, viewers will judge and consider what their electoral candidates have to say — but they’ll also really, really judge how they look. Science says they will vote accordingly, which doesn’t bode well for Trump, who is notorious for his fantastic facial expressions.

This year, a study examining nonverbal communication between Mitt Romney and Barack Obama during the first and third 2012 presidential debates concluded that “nonverbal cues provide a channel through which voters not only form impressions but also shift political support.” Here, “nonverbal communication” can include anything from the posture of a candidate to their ability to cast shade, but, crucially, it includes their facial reactions, as well.

The study, published in the journal Communication Monographs, found that voters are seeking a distinct blend of attributes in their candidates: They don’t want their candidates to look socially submissive or disengaged from the conversation, but they also don’t want a candidate who comes off as overwrought, which the researchers say “can not only distract from policy substance but also undermine communicator credibility.” In other words, they want a leader with a good poker face.

Trump, we know, does not have a good poker face. He has never had a good pokerface. According to this study, his uncontrolled, off-the-cuff facial reactions will likely put him back in the debates.

However, Trump excels in another skill the researchers say people value: looking like you know what you’re talking about. “The performance of leadership often takes precedence over more abstract policy considerations, of which all but the most informed voters have a cursory understanding,” the authors write.

Other studies have demonstrated voters’ ability to be swayed by a good performance. Research published in the journal Science in 2005 found that inferences of competence based completely off of facial appearances (and with no prior knowledge of the candidate’s positions) could predict actual election outcomes. Similarly, research conducted in 2007 found that positive judgements of the facial appearance of gubernatorial candidates also correlated to actual electoral wins. Just like other animals, humans infer personality attributes just by looking at the faces of others — whether or not there’s any indication that those attributes are true.

Performance has screwed over candidates in the past — Al Gore’s contempt for George W. Bush was palpable from his eye-rolls and sighs, and we all know how that turned out. The winner of tonight’s debate may not have the best ideas for policy, but you can bet they’ll look the best while talking about them.