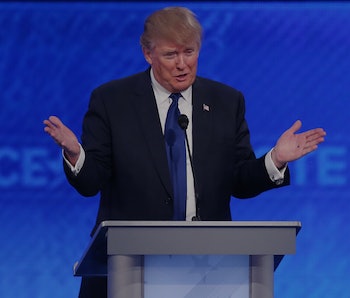 The first general election presidential debate is on Monday evening, and it’s one you’re probably going to want to watch. NBC’s Lester Holt will be directing questions at the candidates on three topics: “achieving prosperity,” “securing America,” and “America’s direction.” The theatrics start at 9 p.m. Eastern and continue to 10:30 p.m., though different outlets will likely have plenty of analysis before and after the big event.

Here are all the ways you can watch the presidential debate tonight:

Just about every news network you could imagine will be showing the debates. ABC, NBC, CBS, FOX, and all the cable news networks will be broadcasting the debate. For cord cutters, news apps will also feature the debate. Who knows, you might catch some ironically timed movie trailers.

YouTube will have live streams from news outlets and commentators, including PBS, the Washington Post, and the Young Turks. The streams will also feature plenty of reminders to register to vote, with links to Google’s voter registration tools.

The debate will also be streaming live on ABC News’s Facebook page, and Twitter will be featuring a stream from Bloomberg Politics. Naturally, you can stream from your phone from any of these sources, too.

More like this
Culture
Sep. 16, 2022
How an ultra-nationalist religious group became one of the most popular film producers in Japan
By Alicia Haddick
Culture
Sep. 17, 2022
You need to watch the most realistic apocalypse movie of the century on Netflix ASAP
By Jake Kleinman
Culture
Sep. 27, 2022
8 thrilling sci-fi movies and shows new on HBO Max and Netflix in October 2022
By Robin Bea
Related Tags
Share: