What is going on with viral marketing during the Republican debates?

Back in January, we got a teaser for the new season of House of Cards framed as a fake campaign ad during a GOP debate commercial break. It was widely reported that viewers were left confused by the placement and its intention, especially if you aren’t the sort of person regularly dabbling in streaming Peak TV.

That delightful interruption is here:

On Thursday night, during the midpoint of the GOP debate on CNN, we got another faux political trailer. This time for The Purge: Election Year.

If you’re anything like me, you might be a bigger fan of The Purge advertising campaigns than the films themselves. Each outing usually corresponds to one of my trips to New York City, and there is something deeply unsettling about waiting for a subway while a list of murder rules are plastered on the walls around you.

For newbies, The Purge franchise revolves around a semi-dystopian future where each year includes a single night of lawless mayhem where everything is legal, including murder. The first film was a disappointingly standard home invasion feature that hinted at a bigger, more interesting world with a fascinating backstory. The sequel actually explored the world and followed a series of interconnecting stories, which was a much better fit for the concept.

The third film was just announced, and this teaser follows on last week’s reveal of a story trailer.

“This July, have your voice be heard. Don’t let your freedoms get taken away. Show your support for the purge. This 4th of July weekend, keep America great!” 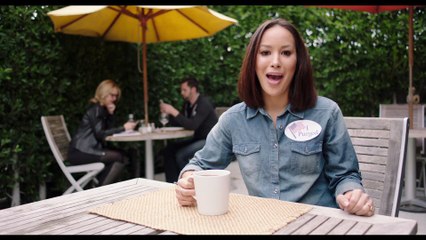 The official synopsis for the new film comes from the production company:

“It’s been two years since Leo Barnes (Frank Grillo) stopped himself from a regrettable act of revenge on Purge Night. Now serving as head of security for Senator Charlie Roan (Elizabeth Mitchell), his mission is to protect her in a run for president and survive the annual ritual that targets the poor and innocent. But when a betrayal forces them onto the streets of D.C. on the one night when no help is available, they must stay alive until dawn … or both be sacrificed for their sins against the state.”

The real question here is why does Hollywood keep putting semi-dystopian political ads into the GOP debates? Is it possible that with Trump in the lead, things like Purge and House of Cards no longer seem like satires? Trump did declare that he could shoot a stranger in the streets and he wouldn’t lose a vote. Oh God. What if we got it wrong? What if this is all reversed? What if the films themselves are actually ads for what comes next?

The new season for House of Cards comes out on March 4. The Purge: Election Year is slated for 4th of July weekend, obviously. The moment when we decide to send Donald Trump into space is slated for whenever the rest of you feel like joining me in protecting America.