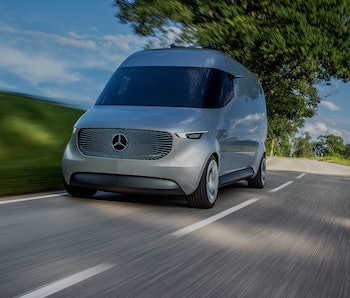 Mercedes-Benz is dreaming up a way to beat Tesla to the electric, self-driving cargo van. It teamed up with Matternet, a drone delivery company, to produce the Vision Van — a research vehicle that is designed to eliminate almost all humans from the delivery process.

The vans are for now conceptual, but Mercedes is throwing over half-a-billion dollars at their realization. Presumably, Mercedes is attempting to prevent Tesla from ruling the cargo field: Tesla CEO Elon Musk has said that next year his company will release self-driving, electric semis, which, if all goes to plan, will revolutionize the industry.

Mercedes wants to take it one step further, though. Its Vision Vans would not only be electric and semi-autonomous — they’d be equipped with Matternet M2 drones, attached to the roof, which would snag packages and fly off to nearby homes for delivery. M2s are themselves autonomous, and can carry just over four pounds for 12 miles on one charge. Once they deliver a package, they’ll find their way back to the van and recharge themselves.

The teaser video is the stuff of near-future sci-fi: An autonomous factory just knows where to route packages. Conveyor belts transport the packages around the factory until they wind up on a shuttle that drops the cargo into a waiting van. Inside the van, the A.I. recognizes when a stowed-away parcel will soon be delivered, and relocates it accordingly.

When it’s delivery time, the van’s innards send the package up to the M2 drone, which then drops it off at the delivery location. One man oversees the entire operation, monitoring the factory and the fleet, and drivers sit in the cars to add a personal touch to chosen deliveries.

Each individual element of the Vision Van exists today. We have self-driving, electric vehicles. We have highly automated factories. We have delivery drones — and Matternet drones already deliver mail.

So even though the video, below, looks like something we’ll never live to see, Mercedes could pull it off. Especially if they actually throw 560 million dollars at the project.